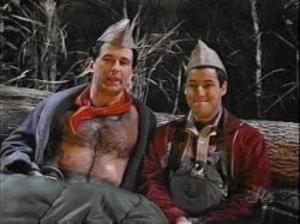 The AFA wants to prevent this kind of activity from happening in real life. (NBC)

A Christian group called the American Family Association is urging other Christians to prevent the Boy Scouts from allowing gays into the organization.

According to the AFA, on May 23, Boy Scout leaders will meet with scout leaders across the nation to vote on whether or not to amend its longstanding membership policy restricting open and avowed homosexuals.

“This is why your involvement is so desperately important,” the AFA said this week.

“We believe scouting should not include homosexual men who go on overnight camping trips with young boys.”

The organization is urging Christians to contact their local Boy Scout Council to vote against a resolution to change the current policy – which forbids gays from volunteering – and then offered a petition to sign that would go to the Boy Scouts on May 22nd.

“We believe scouting should not cave to political correctness in the form of social experimentation,” the AFA said.  “Will you take a few minutes to help the millions of boys who will be affected by this vote?”

The Boy Scouts of America confirmed in 2012 its policy barring openly gay people from participation.

The Supreme Court ruled in 2000 by a 5-to-4 vote that the Boy Scouts have a constitutional right to exclude gay members, the New York Times reported, because opposition to homosexuality is part of the organization’s ”expressive message.”

Scout Oath
On my honor I will do my best
To do my duty to God and my country
and to obey the Scout Law;
To help other people at all times;
To keep myself physically strong,
mentally awake, and morally straight.