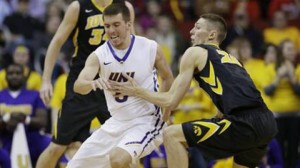 DES MOINES, Iowa – The University of Northern Iowa Panthers used a strong second- half defensive performance to earn a 56-44 win over the Iowa Hawkeyes in the third annual Hy-Vee Big Four Classic at Wells Fargo Arena in Des Moines.

Paul Jesperson was one of 10 Panthers to score in the contest as he led the balanced UNI scoring attack with a team-high 10 points.