This news story was published on December 20, 2014.
Advertise on NIT • Subscribe to NIT

JESUP, IOWA – Emergency rescuers helped a man out of his car after he lost control of the vehicle, drove down an embankment and ended up on top of any icy river.

On Friday, December 19, 2014 at approximately 9:20 AM, the Buchanan County Sheriff’s Office received a report of a motor vehicle accident in the 1500 block of Otterville Boulevard near the Otterville River Access in Buchanan county near Jesup.

According to the investigation, a 2014 Chevrolet Impala operated by Mitch Thompson of Independence was traveling east on Otterville Boulevard when he lost control of his vehicle. The vehicle ran down a river embankment and into the Wapsipinicon River. Thompson was uninjured but was unable to get out of his vehicle. The Jesup Fire Department was dispatched and was able to assist Thompson out of the vehicle. Due to the river being frozen, the vehicle was not submerged in the water and was later removed from the river.

Thompson was issued a citation for Failure to Maintain Control. The Buchanan County Sheriff’s Office was assisted at the scene by the Jesup Fire Department and Jesup Ambulance Service. 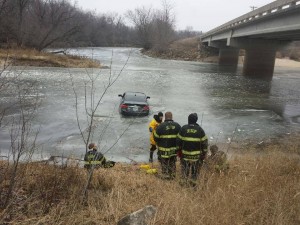 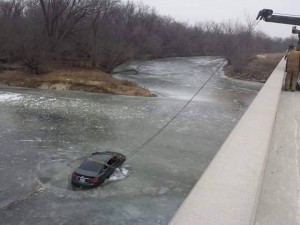