WATERLOO – A trial date for a Parkersburg man who who was shot after he attacked a police officer last Christmas has been set for a fifth time.

Zachary Lee Church, age 28 of Parkersburg, has pled not guilty to charges of felony assault against a peace officer, felony possession of marijuana with intent to deliver and operating while intoxicated. He has had trial dates set for April 15th, July 22nd, August 22nd and November 4th. A trial date was recently set for January 6, 2015 with a pre-trial conference scheduled for January 2nd.

According to a report, Church was approached by Cedar Falls police officer Bob Anderson near 2nd Street and Hudson Avenue in Cedar Falls on December 25th, 2013, at about 2:57 AM. The officer observed Church sleeping in his running vehicle at the location, and smelled the aroma of marijuana from the vehicle and alcohol on Church’s person.

During the subsequent investigation, Church – who is listed as about 6 feet 2 inches tall and 270 lbs. – began to assault officer Anderson, striking him repeatedly about the face and head, and knocking him to the ground. The assault continued until officer Anderson shot Church with his firearm. Officer Anderson suffered cuts, abrasions and swelling to his face due to the assault. Church was hospitalized at Sartori Hospital after he was shot, and then jailed, later posting bond on January 7th.

Church has continued to tour and perform with his music band, Failure of Progress, and cook at Tony’s La Pizzeria in Parkersburg as he awaits trial. 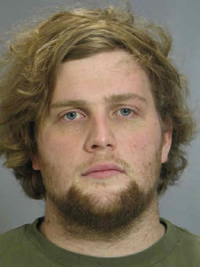