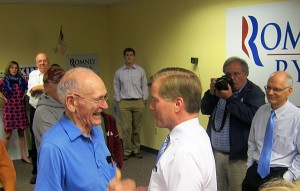 RICHMOND, VA – Former Republican Governor Bob McDonnell of Virginia – who made a campaign stop 2 years ago in Mason City – was convicted Thursday of multiple counts of corruption, including bribery, extortion.

According to ABC News, witnesses in the courtroom described the McDonnell family “as sobbing and hysterical” as thy were found guilty on 11 of 14 charges against them.

A federal grand in January returned a 14-count indictment against former Virginia Governor Robert F. McDonnell and former First Lady Maureen G. McDonnell for allegedly participating in a scheme to violate federal public corruption laws. The McDonnells are said to have received tens-of-thousands in gifts and favors for helping promote a wealthy businessman’s supplement business.

According to the indictment, from April 2011 through March 2013, the McDonnells participated in a scheme to use the former governor’s official position to enrich themselves and their family members by soliciting and obtaining payments, loans, gifts and other things of value from Star Scientific, a Virginia-based corporation, and “JW,” then Star Scientific’s chief executive officer. The McDonnells obtained the things of value in exchange for the former governor performing official actions on an as-needed basis to legitimize, promote and obtain research studies for Star’s products, including the dietary supplement Anatabloc.

A sentencing hearing is set for January, 2015.