This news story was published on June 29, 2014.
Advertise on NIT • Subscribe to NIT

MASON CITY – A Mason City man was sent to prison this month for violating the terms of his probation.

On June 9, 2014, Judge Karen Salic found 23-year-old James Robert Perry guilty of violating the terms of his probation connected to charges brought by Clear Lake police in 2012, which included first degree harassment and assault on a peace officer that brought injury.  Salic sent Perry to jail for up to 2 years for that probation violation.

In addition, Salic found Perry guilty of violating the terms of his probation connected to a fourth degree criminal mischief charge brought by Mason City police in 2011.  She sent him to prison for up to 5 years for that probation violation.

Perry also pled guilty on June 9th to eluding. Perry was sentenced to thirty days in jail and fined $315 plus court costs.

Perry will serve his sentences concurrently.  He is currently in the Cerro Gordo County Jail awaiting transport to prison. 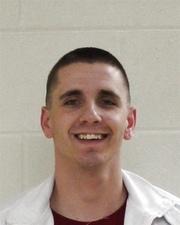