This news story was published on March 25, 2012.
Advertise on NIT • Subscribe to NIT 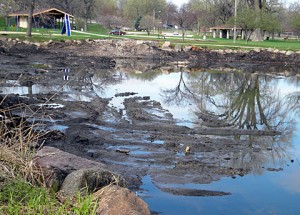 MASON CITY – If you’ve been through East Park lately, you would have noticed the big pile of rocks and sand sitting on the east part of the park.

Asking some of the people in the park what they thought about the mucky, muddy mess that at one time was a pretty little trickle of water going around the center part of East Park what they thought, Lindsey Samuelson said, “It’s pretty gross right now.”

“They’re pumping the water to the otherside,” said Kayla Fairbrother. “There’s a hose with water coming out over there.”  Pointing to where the water was rejoining the creek to flow into the Winnebago River.

Another walker informed us, “They are draining it, since the water level was so low, they decided to dredge it, clean it out.  When they’re done, they’ll take the sandbags away, where they have damned it up and let it refill naturally from Willow Creek.”

Bob Berggren, of the Parks Department, confirmed this by saying, “Yes, the water level was low enough that we are removing the dirt, the build-up, the silt.  We’re just cleaning up the mud.”

4 Responses to East Park creek and pond being dredged