Man on the run from Beje finally caught

This news story was published on May 19, 2014.
Advertise on NIT • Subscribe to NIT

MASON CITY – A nineteen-year-old convicted felon on the run from Beje Clark for weeks was apprehended Sunday by police in a North End rental house.

Cody Dean Dakin of Mason City was wanted on warrants for violating his probation in connection with a felony domestic assault case. Instead of prison, Dakin had been placed in the Beje Clark halfway house in February, but left the facility just weeks later and did not come back. Warrants for his arrest were issued.

Police found Dakin in a house at the 900 block of North Jefferson Sunday. The female protected party connected to the domestic assault was also present, police said.

He is being held in the Cerro Gordo County Jail on no bond, awaiting his placement back into Beje Clark. 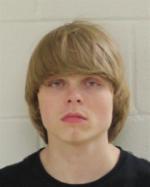