Op-ed: Expel Tornquist from landfill board (by Peter Children)

This news story was published on March 29, 2012.
Advertise on NIT • Subscribe to NIT 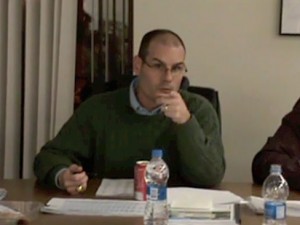 I just finished watching the video concerning the discussion on the 28E agreement which as been in place for forty years, this is between Mason City and the Landfill of North Iowa.  It made me ill.

The first thing that should be done is offer a vote of no confidence on Turnquist. Expel him from the board as someone who is plotting against the best interests of the Landfill. Just as with the office of HRC he convicted himself on tape.

In his second diatribe against the very board he sits on, he openly discussed the dismantling of the Landfill. He mentions other cooperative members such as the Cerro Gordo County Board of Supervisors along with the city of Clear Lake, Iowa as possible members who he thinks would act in concert with his wishes.  This tells me there is a strong possibility he has already had talks with them.  This man is so dumb they should take away his drivers license.  After viewing the tape in question, ask yourself this; how can Turnquist in all good conscience walk into the next Landfill meeting and sit down with the same people whom he wants to dismantle? How…how do you do that?

Measures should be taken immediately to remove him; he has acted counterproductive to the best interests of the very organization on which he serves….and he admits on tape he is soliciting others to join him in his effort.  The Landfill board should not conduct any business in his presence, none.

At this council workshop there were no Landfill members except Turnquist, no invitations were offered to work in unison.  Don’t get the idea this is all about our inept councilman Turnquist, no it goes much further, it permeates City Hall like something bad in the drinking water. What you are witnessing here is an overall mentality that prevails in that building, these people are all out to lunch, they are all off track.  Turnquist mentions several  times on tape what the “constituents” want; what does he know about any of that.  That would be foreign to him.

Do any of you really realize the problems this city would have if we pulled out of the 29 member coalition?  It would be catastrophic, unimaginable; you would not be allowed to use that facility. Your cost of living would go up for one thing.  The big question I see before us now isn’t necessarily about the Landfill as much as it is this; can we really afford to wait until the next election to get rid of Eric?

21 Responses to Op-ed: Expel Tornquist from landfill board (by Peter Children)