MASON CITY – A Mason City police officer was dispatched to a possible assault shortly before 1am Friday morning. When the officer responded to 225 North West 1st Street the victim was uncooperative and a Cerro Gordo County Sheriff’s deputy was called to assist.

During the investigation the victim from the assault call turned on law enforcement and was arrested on a serious misdemeanor count of assault on a peace officer.

Ashley Elizabeth Klein, age 27, was booked into Cerro Gordo County Jail at 2:12am. Klein made an appearance before a magistrate Friday and was ordered held on a $1,000 cash only bond pending further court proceedings scheduled for September 21st at 8:30am.

Ashley Klein has a warrant for her arrest in Scott County, Iowa after she failed to appear to court proceedings on July 11th of this year. Davenport police charged her on June 27th with one simple misdemeanor count of criminal mischief.

Klein is well known to Woodbury County law enforcement. Klein has been convicted in that county of 28 criminal offences dating back to 2004. 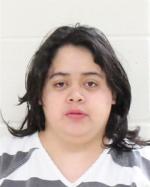 4 Responses to Woman jailed for assault on police officer