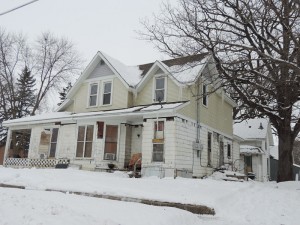 The incident took place at 330 East State Street in the heart of the Cultural Crescent on Thursday, February 27th at about 2:15 AM. The house is adjacent to other houses that are being torn down to make room for the historic Egloff House, that will be moved to that block this spring. The multi-family dwelling is owned by Russ Hardy.

According to a report, $20,000 in damage was inflicted upon the apartment house and its contents. No one was harmed in the incident. Police informed fire fighters upon their arrial that everyone was out from the 2nd story apartment and they could not gain access to the 1st floor apartments. Police were with the occupant of unit 4 who stated that the fire was in the kitchen of her apartment on the second floor. The two apartments on the first floor had the doors forced open, and no smoke or fire was found in either. A male was found in a first floor apartment and would not exit. He finally exited and stood with the police.

A resident told emergency responders that she was heating the house with an electric stove and fell asleep. This was confirmed and is believed to be the cause of the fire. The Red Cross was contacted  to help the occupants of the apartment.