Over 700 Iraqis killed in January 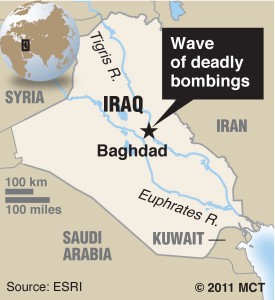 BAGHDAD – According to casualty figures released today by the United Nations, a total of 733 Iraqis were killed and another 1,229 were wounded in acts of terrorism and violence in January.

“Iraq continues to face substantial security challenges by armed groups who promote violence and seek to divide people. Political, religious and civil leaders urgently need to show national unity in dealing with violence and in promoting social peace. Security operations need to go hand-in-hand with inclusive policies, based on the respect for human rights, the rule of law, social development”, the Special Representative of the United Nations Secretary-General (SRSG), Mr. Mladenov said. “As fighting continues to affect the people of Anbar, I am deeply alarmed by the humanitarian situation of thousands of displaced families and particularly of those stranded in Fallujah. They lack water, fuel, food, medicine and other basic commodities”, the UN Envoy added. “It is vital that everything possible is done to ensure that urgent humanitarian aid reaches those affected people”, he said.

Casualty figures for January do NOT include casualties resulting from the ongoing fighting in Anbar, owing to problems in verification and in ascertaining the status of those killed and injured