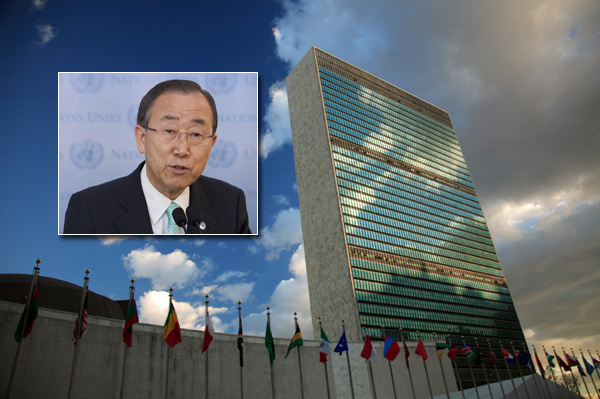 11 February 2013 – “Fighting rages. Sectarian hatred is on the rise. The catalogue of war crimes is mounting. Sexual violence is widespread,” said United Nations Secretary-General Ban Ki-moon, speaking of the conflict in Syria in an address to a major United States think tank on Monday.

In his remarks, Ban Ki-moon highlighted Syria and climate change as two major issues that threatened huge, global consequences and called for the international community to uphold its responsibilities in facing them.

“In both cases, the international community is not upholding its responsibilities,” Mr. Ban told the Council on Foreign Relations as he delivered the Sorensen Distinguished Lecture of that group, in an event moderated by news anchor Christiane Amanpour.

“Both risk the harsh judgement of history should present trends continue. And both require collective action that must involve the United States,” Mr. Ban said in the talk, during which he announced plans to visit Washington D.C. later this week for talks with Secretary of State John Kerry and other government officials.

“Syria is self-destructing,” he said of the nearly two-year old conflict between President Bashar al-Assad and its opposition, which has left more than 60,000 people, mostly civilians, dead and more than four million people in need of humanitarian assistance.

“The situation cries out for action by the Security Council in particular,” he said. “The Security Council must no longer stand on the sidelines, dead-locked, silently witnessing the slaughter. It must be willing, at long last, to come together and establish the parameters for the democratic transition that could save Syria.”

Urging both the Security Council and Syrian authorities to respond positively to the offer tendered by opposition leader Moaz al Khatib to open discussions with the Assad government, he said: “We need to find a way towards negotiations between empowered Government and opposition delegations that can make key decisions about the country’s future.”

In that light and in the context of the broader Arab world and elsewhere, he cautioned, however, that “people want real change, not grudging, cosmetic adjustments,” and that current troubles in Egypt and Libya should not be seen as proof that the old order was a better one.”

A positive outcome to such changes required “close and patient engagement,” he said: “The international community has a duty to accompany these transitions with meaningful contributions.”

Turning next to what he called “the gathering threat of climate change,” he noted that scientists have long sounded the alarm on what he called the gathering threat,” stressing that the potential consequences were well known, including “a downward global spiral of extreme weather and disaster,” along with development reversals, increased displacement, aggravated tensions over resources and destabilization of fragile states.

Despite the dire possibilities, he said, however that, “Too many leaders seem content to keep climate change at arm’s length, and in its policy silo. Too few grasp the need to bring the threat to the centre of global security, economic and financial management.”

“It is time to move beyond spending enormous sums addressing the damage, and to make the investments that will repay themselves many times over,” he said, noting the potential of the renewable industry to do that and to spur the world economy, as proposed in his Sustainable Energy for All initiative.

“A global climate change agreement would give us the engine we need to advance us decisively on this path,” he stressed, welcoming US President Barack Obama’s “new resolve” to address climate change and give it high political priority.

Calling for government and business leaders to mobilize the political will for a global, legally binding climate change agreement by 2015, he said. “World leaders have pledged to reach an agreement, and we must hold them to that promise.”

Urging world leaders to strengthen and utilize the United Nations in facing both urgent challenges and others facing the world, he warned, however, that “International machinery does not operate on its own. Hardware requires programmers.”

“We need national leaders who think globally. We need a stronger sense of collective responsibility. And we need the United States,” he said.