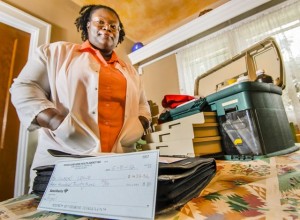 WASHINGTON — For nearly a year, unemployed home health worker Leslie Gilbert of Grand Rapids, Mich., has fought to get more than $400 in unpaid wages from her former employer.

After months of promises that the money would be in her “next paycheck,” Gilbert filed a complaint in October with the state. Officials told Focus Care Home Health of Southfield, Mich., to either pay Gilbert by June 1 or face a formal hearing.

Gilbert still doesn’t have her money.

Her experience is a classic example of what workers’ rights advocates call “wage theft,” the practice of underpaying or not paying workers for their labor.

The problem reflects a changing economy in which low-wage work has increased, more companies try to cut labor costs to stay afloat in a sour business climate, and fewer workers belong to unions that might protect them. At the same time, budget-cutting state and federal governments do not enforce wage laws as aggressively as they once did.

Wage theft can be as simple as stealing tips from restaurant servers, illegal deductions from a worker’s paycheck or failing to pay overtime or the legal minimum wage. It also can take other forms, such as classifying workers as “independent contractors” to avoid paying unemployment insurance.

Millions of workers are losing pay, with the majority in low-income service industries such as fast food, domestic work, agriculture, retail, hotel and tourism and home health care. It’s also a big problem in the warehousing and construction industries, which employ large numbers of recent immigrants and undocumented workers, who are reluctant to complain, fearing scrutiny of their immigration status.

Gilbert thought she had finally won her claim when a company supervisor called to tell her a check was on its way.

“Then he told me that when the check gets to me, I should send it back because it doesn’t have a signature on it,” Gilbert said. Once she returned the check, the supervisor said, he would sign it and send it back again.

She thought that a waste of time, adding more time mailing the check back and forth when the company could have simply issued a new check, signed it and sent it right away. “It’s not a valid check,” she said. “I can’t cash it. So what does it matter if I send it back?”

Finally, after exhausting her unemployment insurance benefits in March, relying on food stamps and struggling to keep her utilities on, the worthless $435 check was the last straw for Gilbert.

“I’m so done with this,” Gilbert said. “I’ve tried to rectify this so many times before I ever filed a complaint. There’s no need to get upset and go back and forth about this anymore. If we need a hearing, I’m fine with going for the hearing.”

Officials at Focus Care did not return calls to comment on Gilbert’s situation. Her complaint is one of three the state has recently investigated against the company. One of the claims was paid, Gilbert’s is pending and the other was referred to the state attorney general’s office for possible court action, said Jack Finn, administrator of Michigan’s Wage (ampersand) Hour Division.

Gilbert’s hometown of Grand Rapids is one of dozens of cities, such as Houston, Memphis and Los Angeles, considering additional legislation to fight wage theft.

Others — including Kansas City, Mo.; Miami-Dade County; Denver; San Francisco; Seattle; and Austin, Texas — already have enacted laws. Some enhance penalties for payroll fraud, bar violating companies from receiving government contracts and, in some cases, make it easier for unpaid workers to get compensation.

“There wasn’t a place that we went where we didn’t find someone with a story,” said Jordan Bruxvoort, associate director of the Micah Center, a religion-based community justice group in Grand Rapids and part of a local task force that studied the problem.

“In this economy, there are some workers who are so desperate for a job that they will put up with a lot of violations of their rights. It’s a natural human response to hold onto what you have even if it’s not very good.”

Nearly two out of three low-wage workers experienced some form of wage theft each week, according to a 2009 survey of nearly 4,400 low-wage workers in Chicago, Los Angeles and New York. Three out of four reported underpayment or non-payment of wages, and one in four said they were paid subminimum wages. On average, these workers lost about $51 a week in unpaid earnings, the survey found.

The lost wages add up. Workers in Houston lose more than $753 million a year, according to a recent study there. While the cities aim to write new protections into law, existing laws often go unenforced.

The U.S. Department of Labor, which monitors compliance with federal wage laws on behalf of more than 130 million workers, has only 1,000 enforcement agents. That’s about one for every 141,000 workers, compared with one per 11,000 workers in 1941.

State wage-and-hour investigators are equally scarce in the wake of massive budget cuts, a 2010 survey found. In 43 states and the District of Columbia, a total of 660 state investigators were covering nearly 90 million workers, about one per 146,000 employees.

Last year, Texas lawmakers closed a loophole that let employers escape prosecution if they pay workers only a portion of the wages they’re owed. And in January, California’s Wage Theft Prevention Act took effect, requiring that new hires get written notice of pay rates and how their pay is determined. The new law also increased penalties for nonpayment.

Business groups have typically opposed wage-theft laws as a regulatory burden. Earlier this year, the New York State Senate voted to eliminate a part of the state’s 2011 wage-theft law that requires employers to provide annual pay notices to workers — information typically found on their pay stubs.

Business groups acknowledge that some violators do so intentionally, but they said most violate wage laws by accident.

In Massachusetts, for example, the law requires general contractors to treat subcontractors as direct employees, even though they may only need their services for a short time. Confusion over the legal definition of “subcontractors” causes unintentional violations, said Jack Mozloom, northeast spokesman for the National Federation of Independent Business.

“There’s no question that in any industry there are a handful of unscrupulous employers who will take advantage of employees, so we’re not against these laws in a blanket fashion,” Mozloom said.

“We want to work with the regulators and policymakers in all the states to make sure we have something in place that protects workers, but which doesn’t discourage opportunities and employment for both contractors and subcontractors.”