With ‘Prometheus,’ Ridley Scott returns to the unknown, this time in 3-D 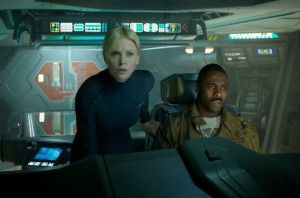 LOS ANGELES — Ridley Scott studied painting at the Royal Academy of Art in the 1950s, but unlike classmate David Hockney, he decided the career would be a life of cruel dawns. “Staring at a big canvas every morning with a pack of cigarettes saying, ‘I hate what I just did yesterday.’ So it was a fight with yourself.”

(PHOTO: Charlize Theron and Idris Elba on the bridge of the ship Prometheus.)

The filmmaker still paints for pleasure, but ruefully he points out that he “never truly finishes a canvas,” and perhaps that’s one reason that, with his new film “Prometheus,” Scott, 74, returns to the deep-space mythology of his 1979 film, “Alien,” to find empty corners and layers that can be thickened.

Just two years after “Star Wars,” “Alien” may have been just as revolutionary with the universe it presented — a future where corporations calculated the profit between planets, toyed with the lives of grimy “space truckers” and reached out to cosmic mysteries that felt like predatory offspring of Kubrick’s “2001: A Space Odyssey.”

The tension and visions of the film made Scott an international name (willowy star Sigourney Weaver had a similar breakthrough), and he seemed posed to become a darker and more mature counterpoint voice to the friendly space stories of George Lucas and Steven Spielberg. But Scott made one other sci-fi film — the masterpiece “Blade Runner” in 1982 — and then simply walked away from tales of machine men and faster-than-light ideas. (The “Alien” franchise continued with three sequels, but Scott had no say or role in them.)

Now Scott has returned and, to the breathless excitement of fans at recent Comic-Con conventions, “Prometheus” will arrive in theaters Friday, 30 years to the month after “Blade Runner.” The story is technically a prequel, but Scott scowls at the term, which he suggests is a sort of connected narrative that is misleading.

“This takes place in the same universe as ‘Alien,’ but it stands on its own as a story,” he said during a conversation at his Los Angeles offices, where a space suit stands in the corner like a suit of armorin an old castle keep. “There’s moments where you see connections if you’re looking for them, but the story is not leaning on what came before. There are strands of ‘Alien’ DNA in there, if you will.”

A script by Jon Spaihts was taken in different directions by “Lost” co-creator Damon Lindelof, who did heavy lifting over weeks of meetings with Scott where he carved out a story from the words already on the page, Scott’s forming thoughts and his own ideas.

The film stars Noomi Rapace, Michael Fassbender, Guy Pearce, Idris Elba, Logan Marshall-Green and Charlize Theron, and the focus is the crew of the starship Prometheus, who are dispatched to a distant planet after archaeological discoveries on Earth suggest that the secret of human creation might be awaiting there.

For several years, Scott had said he wanted to make a film that answered a visual question asked by one memorable scene in the original “Alien” film: What was the story behind the giant dead alien seated within machinery (he’s been commonly called “space jockey” by fans) that was found by the crew of the Nostromo?

That mystery presumably will be answered in “Prometheus,” but don’t be surprised if it isn’t. The project has been slippery because Scott — unlike, say, Lucas, whose “Star Wars” films are made to be mapped, cross-indexed and turned into toy sets — has approached this space epic as a canvas where improvisation and collaboration are the north star.

“He’s just so precise and fun and mischievous and just full of interesting and quirky ideas for the character,” Fassbender said early in the six-month shoot, which bounced among five countries. “They come to you in passing, but then he lets you run with it, and there’s a lot of freedom there.”

Lindelof said that Scott’s return to sci-fi is a swoon moment for fans who assumed that he was a tourist who accomplished so much in his two visits to the sector that odds of a return were scant.

“He is universally lauded and appreciated for ‘Alien’ and ‘Blade Runner,’ but he is not thought of as a science-fiction director in the same way that, say, a Jim Cameron is,” Lindelof said. “We think of an auteur, coming to film from an arty and European place. You look at his career, all these films through the years, but he’s made only two science-fiction films — but look at the way we continue to feel the impact of those films in a real way after so many years. That’s a remarkable thing.”

Now Scott says he is mulling a return to “Blade Runner,” and some of the excitement may be due to the 3-D cameras that he used on “Prometheus” — a new sort of canvas. But why go back to familiar ground at all?

The director of “Gladiator,” “Black Hawk Down” and “Thelma & Louise” compared it to Hockney’s late-career pilgrimage to go to the beginning of his artistic life and start again by jettisoning seven decades of baggage and finding new art in old hands. “He needed to shed it all,” Scott said. “That’s brave.”