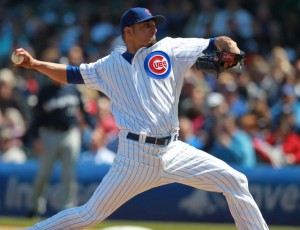 CHICAGO — So this was the way it was supposed to go when the new regime was making plans for its first Cubs team: Good pitching and timely — if very light — hitting, preferably both components together in one game.

In their fourth try against the defending National League Central champion Brewers, the Cubs finally got it right.

They got the pitching — 82/3 innings of three-hit ball from Matt Garza — and the hitting — six runs on seven hits in the third inning for an 8-0 victory that was impressive even if they still are three games behind the World Series champion Cardinals.

At least the Cubs will begin a three-game series in St. Louis on Friday with some confidence.

“We could have knocked them out of the playoffs last year,” Garza said. “That last series (losing two of three) we kind of handed (the wild-card playoff spot) over. It’s more motivation than anything.”

Unfortunately for the Cubs, Garza won’t be pitching in the series. Right now, he is at the top of his game, with a 5-0 record in his last eight starts dating to Aug. 30 and a 1.23 ERA after two starts this season.

He could have earned a complete-game shutout Thursday if he had not air-mailed a ninth-inning two-out throw to first base that almost was sent to another zip code. Cubs manager Dale Sveum called on Shawn Camp for the last out, with Garza at 119 pitches.

Garza called it lots of things, many unfit for public consumption.

Garza was so in rhythm — buoyed by the big third inning — that he retired 17 of 19 Brewers from the second through seventh.

And then there was the offense, which had been almost nonexistent during the 1-5 start.

In fact, the Cubs’ six runs in the third off former Cy Young winner Zack Greinke was more than they had scored in any other entire game this season.

“It was nice of the offense to have a big day,” Sveum said. “We got a lot of big hits with guys in scoring position, back-to-back-to-back.”

In the first six games, Cub batters were 7-for-50 with runners in scoring position.

“That’s very important because we have a team (without) a lot of power hitters.” Soriano said. “Every at-bat counted and that was the difference.”

That was also the plan from the beginning. It just took a while to execute it all in one day.