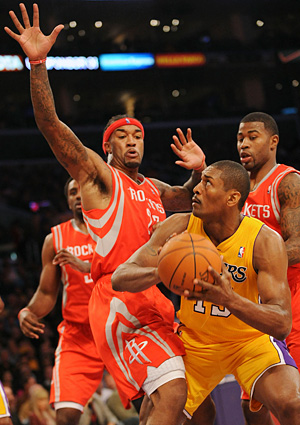 LOS ANGELES — It’s not quite Magic and Kareem, or even Kobe and Shaq, but the Lakers are rapidly finding a tough-to-top 1-2 combo.

(PHOTO: Los Angeles Lakers’ Metta World Peace attempts a shot against the Houston Rockets’ Jordan Hill, left, and Terrence Williams in the first half at Staples Center in Los Angeles, California, on Tuesday, January 3, 2012. The Lakers defeated the Rockets, 108-99.)

Kobe Bryant shook off a two-game shooting slump with 37 points and Andrew Bynum shook up the Houston Rockets with his first 20-20 game.

Not surprisingly, the Lakers defeated the Houston Rockets, 108-99, Tuesday at Staples Center.

Bynum started the season late because of his well-publicized four-game suspension, but he has arrived on time, putting up averages of 22.7 points and 17 rebounds in three games.

He had 21 points and 22 rebounds in 38 minutes against Houston, dominating down low yet again and evoking a cut-and-paste observation from Bryant.

“I can’t say that I am (surprised),” Bryant said. “We all know the amount of talent that he has and he’s really worked on it. One thing that I like about him is he has an engine inside him. He wants to do well. He wants to dominate. He has an ambition to be great, and that’s the biggest positive about him aside from all the physical attributes.”

And to think Bynum isn’t even in complete shape yet.

The 38 minutes against the Rockets were a team high, and he laughed about it afterward.

Or as Lakers coach Mike Brown said of his conditioning, “If he can get it to where it’s great, oh my gosh.”

Bynum had an impact on the game in just about every way possible.

He took a pass from Derek Fisher and flipped it over his right shoulder without facing the basket for a no-look layup in the third quarter.

Then he blocked the shot of point guard Kyle Lowry, who had Bynum in a one-on-one far away from the basket.

Even on his misses, Bynum’s footwork was solid, his movement notably agile. He pivoted around Luis Scola to free himself down low in the fourth quarter but his shot rimmed out.

A nice lead pass from Matt Barnes led to Bynum’s dunk in the final minute, pushing him over 20 points for the night. He was one rebound shy of tying his career high.

“I think I’m getting a lot more touches, so it’s easier to be confident,” Bynum said.

Bryant’s five-foot bank shot from the left block gave the Lakers a 97-89 lead with 2:29 to play. Then he bounced an 11-footer around and into the rim.

Earlier in the game, Bryant scored after passing the ball to himself. He started an up-and-under move against Kevin Martin, threw the ball off the backboard left-handed, grabbed it and made a five-footer with his right hand. He was not credited with an assist.

Slump or no slump, it’s obvious who gets top billing in the Lakers’ offense.

“He’s got five championship rings,” Brown said before the game. “Bynum and (Pau) Gasol have maybe one or two. So I’m going to go with the man who has five. … He’s been there and done that so I’m going to give him some freedom.”

“Am I concerned about it at this point? No,” he said “Two months from now, if he’s shooting 34 percent from the field, OK, I’m going to have a lot of concerns.”

There were none Tuesday, for two obvious reasons.