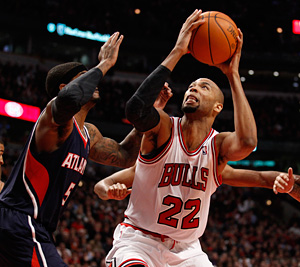 CHICAGO — For three quarters Tuesday night, the United Center sounded like a library, built brick by brick by the Bulls.

(PHOTO: Chicago Bulls forward Taj Gibson (22) looks for room to shoot against Atlanta Hawks power forward Josh Smith (5) during the first half of their game at the United Center in Chicago, Illinois, on Tuesday, January 3, 2012.)

Statisticians were looking up franchise offensive worsts as the Bulls dragged 27.8 percent shooting into the fourth quarter and trailed by 14.

Luol Deng sneaked back door off a designed inbounds play to take a pass from the freshly inserted Joakim Noah and score the game-winner with 3.7 seconds left in the Bulls’ improbable 76-74 comeback over the Hawks.

“We ran a good play,” Deng said on the court after the game. “We always play hard.”

Coach Tom Thibodeau had ridden the lineup of Deng, Derrick Rose, Kyle Korver, Taj Gibson and Omer Asik for all but the final two possessions of the fourth quarter, and that group used a 20-3 run early in the quarter to pull even.

Rose, who scored 17 of his 30 points in the fourth, hit three 3-pointers in that run.

Rose had given the Bulls their first lead with 57.9 seconds left, but Josh Smith countered with an alley-oop dunk. Jeff Teague missed two crucial free throws with 17.5 seconds left, and Rose powered home a layup with 9.9 to go over shot-blocker extraordinaire Smith, who had victimized Rose twice in the quarter.

Deng, who scored 21 points, got called for an inexplicable foul on the Hawks’ ensuing inbounds play, tripping over Al Horford. But Horford sank only 1 of 2 free throws with 7.7 seconds left, setting the stage for Deng’s final heroics.

Noah, who played just 18 minutes because of foul trouble, had the winning assist.

The Bulls were so lifeless through three quarters that Julius Peppers, sitting courtside, could’ve been excused for sacking somebody.

They missed 14 consecutive second-quarter shots, went scoreless for 5 minutes, 18 seconds and shot 2-for-21 overall in the second to narrowly avoid setting franchise lows for points and field goals in a half. Their 26 points and nine field goals slightly topped the marks of 23 and seven.

The woes weren’t limited to poor shooting. Horford took a half-court shot to avoid a shot-clock violation, and the Bulls stood around while Vladimir Radmanovic grabbed the offensive rebound for another possession on which Horford scored.

Deng’s frustrations boiled over with a third-quarter technical as the Bulls occasionally were stymied by a zone defense.