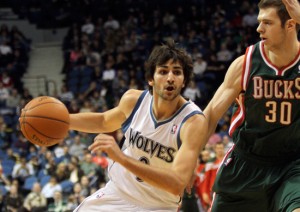 MINNEAPOLIS — Ricky Rubio is going to keep shooting. And most folks associated with the Timberwolves feel he’s going to be just fine in that department.

But Rubio, whose every move has been performed under the microscope, was again asked about his shooting after Tuesday’s victory over San Antonio. Rubio played nearly 24 minutes and scored six points with three assists. But he was being asked about the two three-point shots he missed.

“Today I had zero for two on my threes, but when you take away your confidence sometimes it’s hard to score the shots,” he said. “I worked hard this summer with the lockout. I gained my confidence back, and when I have the confidence the shots are going to go in for me.”

Everybody knew about Rubio’s play-making ability. But many questioned whether his shot was going to be a drawback. Through five games, Rubio is shooting 51.7 percent (15-for-29) overall, 50.0 percent (4-for-8) on three-pointers. Rubio was 2-for-3 on three-pointers against Dallas on Sunday, with his shots coming at crucial times. Before that, Rubio had made both three-point attempts against Miami.

“I’ve been impressed,” Adelman said. “He hit a huge three when (Dallas) came at us. We needed the three badly, and he knocked it down. He seems to have the confidence to go ahead and do that. He’s been real solid.”

Passing is Rubio’s calling card. But Adelman said Rubio has to do enough scoring to keep defenses honest and those passing lanes open. That means hitting open jumpers and occasionally attacking the basket, another skill Rubio has shown.

“He’s got to make open shots,” Adelman said. “He has to make plays at the basket so they don’t play you pass-first; teams are still doing that.”

Against Miami, Wolves backup big man Anthony Randolph scored 14 points while playing nearly 25 minutes. Against Dallas, he played 17:03, had four rebounds and four points. But against San Antonio on Monday, he never got off the bench.

Clearly matchups dictate a lot of how much Randolph is used. But Adelman said Randolph needs to be more consistent.

“We’re trying to instill in each guy with what can you do, what are your strengths to help us win?” Adelman said. “And we’ve been trying to work with Anthony on the same thing. He was doing just fine (against Dallas), then he had a lapse of like 4 minutes where everything went wrong.”

The Wolves might avoid Zach Randolph, who bruised his knee early in Memphis’ loss to Chicago on Sunday.