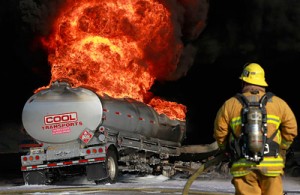 LOS ANGELES — A tanker truck filled with thousands of gallons of gasoline exploded on the 60 Freeway in Montebello early Wednesday afternoon, damaging the roadway and overpass and shutting down a major transportation artery in one of the busiest vehicle corridors in the nation.

The 60 east of Los Angeles was closed in both directions between the 710 and 605 freeways. Late Wednesday, the California Highway Patrol said the freeway would remain closed at least through the Thursday morning commute.

State transportation officials, however, said Wednesday night that it was unclear when the stretch would be reopened. The extended closure will create the possibility of an exasperating morning commute for motorists traveling east and west between Los Angeles and the San Gabriel Valley and Inland Empire. About 220,000 vehicles traverse that part of the freeway daily, according to the California Department of Transportation.

The accident already created a traffic nightmare for tens of thousands of motorists who were either stranded on the freeway as firefighters battled the blaze or scrambled to find alternate routes on traffic-clogged surface streets and freeways.

The driver and a passenger in the truck escaped uninjured as flames began to consume the tanker’s rear trailer, officials said. The driver had been unable to move the vehicle off the freeway and abandoned it under the Paramount Boulevard overpass, which sustained significant structural damage.

Witnesses described hearing two explosions shortly after noon, the second of which caused floors to vibrate in nearby buildings.

“It gave me a good scare,” said Miguel Osorio, 25, who was helping customers inside a Chevron gas station when he heard the blasts.

He called a gas station closer to the freeway, fearing that it had exploded into flames. “The fire looked like it was coming from that general area,” Osorio said.

The intense flames, stoked by about 8,800 gallons of fuel on the truck, caused moisture inside the concrete overpass to boil over and blow out chunks of rubble, fire officials said.

“The explosion most witnesses heard was the concrete exploding from the extreme heat,” said Montebello Fire Chief Tim Wessel.

Firefighters reported seeing pieces of metal and concrete dropping from the overpass as they arrived on the scene, officials said. Massive billows of black smoke rose from underneath the bridge as fire crews tried to beat back flames. They battled the blaze for about two hours before it was extinguished. Late Wednesday, crews were offloading the remaining fuel on the truck.

One firefighter sustained a fractured leg and was taken to hospital but was expected to be released Wednesday night, Wessel said.

The CHP said it had interviewed the truck driver and passenger. Both gave statements and were released.
The agency said it was unclear whether the truck had hit another vehicle, run over debris or had a mechanical problem. CHP investigators were planning to inspect the tanker to determine if brake or other mechanical failure was involved.

An emergency contract was awarded Wednesday evening to Flatiron Construction to repair the overpass, the California Department of Transportation said. Engineers from the agency were inspecting the structure Wednesday night to determine when it could be reopened.

Motorists were urged to use other east-west routes, such as the 10 and 210 freeways to the north. Another possibility, officials said, is to use the 605, 105 and 5 freeways to travel to and from Los Angeles.

As drivers tried to get where they wanted to go, relatively quiet surface streets in Montebello and neighboring cities were flooded with a stream of vehicles that lasted into the night. The closure also resulted in traffic tie-ups on freeways across the region as drivers sought to avoid the endless backups.

Michael Campillo was using side streets to travel from Santa Monica to the Whittier area.