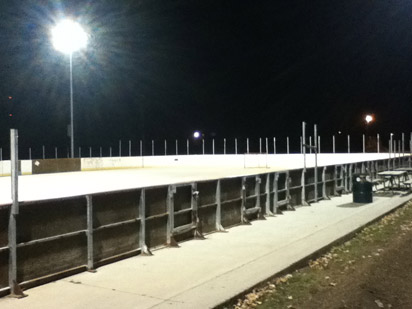 NORA SPRINGS - The community of Nora Springs looked into the possibility of a city ice rink, but due to costs and other obstacles, decided not to pursue the amenity.

NORA SPRINGS – The community of Nora Springs looked into the possibility of a city ice rink, but due to costs and other obstacles, decided not to pursue the amenity.

According to a statement from Nora Springs Parks Board Chairperson Emily Dykstra:

The idea of a city ice rink was brought to the Parks Board last winter. Parks Board members researched the idea and discussed it at our January and February meetings, and voted not to pursue the idea for the following reasons.
Startup cost. We considered commercial-grade “portable” rink setup packages that included liner, boards, and ice maintenance equipment, such as those available through nicerink.com. Startup costs also include hiring to assemble, install, and fill the rink; cost of water; and hiring for disassembly in the spring. Startup cost would be around $10,000, which would need to be obtained through grant requests. Installation, disassembly, and water would be long-term ongoing costs that would need to be worked into the City’s budget. It would not be possible to charge fees for usage, so the rink could not be financially self-supporting.
Storage. The rink setup would need to be stored indoors in the off-season.
Lack of an appropriate location. The volume and weight of water necessary would damage the lawn, concrete, or asphalt underneath the liner due to repeated freezing and thawing, and result in increased maintenance or replacement costs of those surfaces. Draining the water in the spring was also a consideration. Locations also need to have appropriate lighting, parking, and public view to encourage usage and discourage misuse and vandalism. The Board did not feel that any of our public park locations met all of these requirements.
Ongoing maintenance. Ice requires ongoing maintenance with use and with every freeze/thaw cycle. The Board did not feel that this could be asked of our city maintenance crew because it would take time away from more vital winter maintenance, such as plowing. This also brought up the question of liability. We did not consult with the City’s liability insurance carrier specifically about an ice rink, but as with all Parks facilities, the City can be held liable for lack of maintenance leading to injury.
Uncertainty of demand and availability of other facilities.
As Parks Board members, we believe that we have done our due diligence in researching and discussing an idea brought to us by the community. We came to the conclusion that it was not feasible to pursue an ice rink.
The Parks Board meets on the first Monday of every month at 7:00 at City Hall. The Board will not meet in December. Meetings are open to the public, though requests for comment must be added to the official agenda at least 24 hours in advance of the meeting.