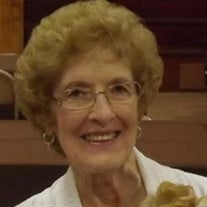 Visitation with public viewing will be held Friday evening, December 17, at Hogan Bremer Moore Colonial Chapel, 126 3rd St NE, Mason City from 5:00 pm until 7:00 pm and will resume one hour prior to Bernadine’s service at the church on Saturday.

Bernadine was born March 26, 1936 in Ruthven, Iowa to Howard and Mae (Prew) Prather. She graduated from Ruthven High School in 1954. She then attended Hamilton Business College in Mason City. She married Kenneth Rodemeyer in 1955. They were blessed with three children, Patti, Jeffrey, and Pamela. Patti died in 1975.

Berni started out as a stay at home mom. She started working at Sears when the children were in school. Berni worked in customer service, and as a switchboard operator for 28 years, retiring in 1998.

Berni was devoted to her family and church. She served as a Sunday School teacher for many years. She also served as president of her circle and of LWML in her younger years. She was church secretary for many years and was in the church choir. She was a charter member of the church book club: Pageturners. Berni was an avid Iowa Hawkeyes fan and attended many basketball games through the years. When she couldn’t attend the games in person, she cheered from her family room, and later from the dining room at Good Shepherd Health Center. She was an avid reader, and enjoyed walking in nice weather. She and Ken took many wonderful trips. She was especially fond of Estes Park, Colorado and Mackinac Island. Berni’s greatest joy was spending time with her children, grandchildren, great grandchildren, and extended family.

In addition to her parents and daughter, Patti, she is preceded in death by her twin sister and her husband, Geraldine and Jim Fountas; sisters and their husbands, Phyllis and Roy Henaman and Patricia and Ray McCarville; and her brother and his wife, Jack and Bonnie Prather; her grandson, Kuper Malmin; as well as by brothers in law, Leonard Marxen and Dalton Rodemeyer; and sister in law and husband, Donna and Guy Secory.

She is also survived by her sister, Rosemary (Gaylen) Dick, of Milford; and sisters in law, Joyce Fountas, of Mason City, and Stella Rodemeyer, of McAllen, Texas; as well as many nieces, nephews, and cousins.