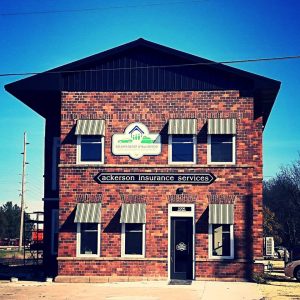 In April 2015, Staci Ackerson saw an opportunity to expand and began working with the North Iowa Area SBDC to help make her vision come true. Shankland Insurance was based in downtown Charles City, Iowa, but Staci had her eye on a new location. The Charles City Western Railroad depot was built in 1910, but now stood derelict on the edge of downtown. The beautiful brick building, once filled with hustle and bustle, had fallen into serious disrepair but Staci knew it could be brought back to life. With so much work needed to rehabilitate the building, Staci approached Mark Wicks at the Charles City Chamber of Commerce for advice; he recommended she contact Brook Boehmler at the North Iowa Area SBDC. The North Iowa Area SBDC helped Staci figure out her options and make the most of her resources to bring this Charles City landmark back to life. The North Iowa Area SBDC worked with Staci to develop a cash flow analysis and find assistance in purchasing the building.

In October 2015, the Iowa Economic Development Authority (IEDA) awarded a $55,000 Main Street Iowa Challenge Grant for the Community Revitalization project of rehabilitating the building. Staci used the Main Street Iowa Challenge grant to buy the building and comprehensively restore and repurpose the building. Staci added two rental apartments to the second story, while the ground floor houses the Shankland Insurance offices. The original historical charm of the building was retained wherever possible, including the railway office’s original safes, woodwork, and flooring. The apartments help address Charles City’s need for transitional rental housing for new corporate hires. During the renovation, several old concrete piers original to the old railway station were discovered on the property. When it was determined to be too costly to remove the concrete piers, they developed an innovative solution: using the concrete as the foundation for a small storage unit facility. 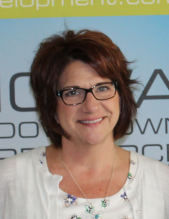 By January 2017 the building had been restored to its former glory, with the two rental apartments already leased. Staci is a veteran of the United States Armed Forces and continues to give back to her community through her involvement in Rotary (currently serving as President), The Elks, and via Shankland Insurance by sponsoring community organizations and events (the local Boy Scouts chapter, Charles City School Drama club, Foster Grandparents, local school sports programs, and the Proud Parents Organization, to name only a few). Staci lives her commitment to bettering her community. The rehabilitation of the historic Charles City Western Railroad depot is an important step in the continuing efforts to revitalize Iowa’s historic main streets.

Mark Wicks of the Charles City Chamber of Commerce said, “Staci had a real vision. This was a serious nuisance property – they really cleaned it up and turned it into something Charles City can be proud of. She brought that building back to life while also expanding her business – it’s a win-win for everybody in Charles City.”

The NIACC John Pappajohn Entrepreneurial Center is the expert in rural business innovation and success. In partnership with North Iowa’s Small Business Development Center, together we provide tools, support, and resources to Iowa’s entrepreneurs.