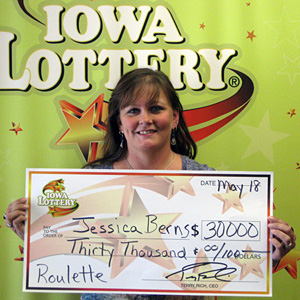 DES MOINES, Iowa – A Decorah woman never dreamed she’d win a top prize of $30,000 on her “Roulette” instant-scratch ticket while waiting for her kids to get home from school.

Jessica Berns, 37, said she bought the ticket for something to do while she waited for her kids to get dropped off by their school bus and couldn’t believe what she saw.

“I didn’t believe it,” Berns said. “I quick ran back to the gas station and had them check it. I’ve been in shock ever since!”

Berns had her ticket validated at Engen Express, 610 North St. in Ridgeway where she had purchased it. She hasn’t told her kids yet, but she knows they’ll be excited.

“They’re going to be excited and I’m sure they’ll tell me what they want!” Berns said with a laugh as she claimed her prize Friday at the Iowa Lottery’s regional office in Mason City.

Berns, who is a nurse’s aide, said she has told some of her coworkers and everyone is very happy for her. She said she hasn’t yet made plans for the money.

Roulette is a $3 scratch game. Players scratch the “winning numbers” to reveal 20 numbers. Then they scratch each corresponding “roulette number” around the wheel. If players match all of the “roulette numbers” in the same prize area, they win that amount. The overall odds of winning a prize in the game are 1 in 3.85.