It was a 14-minute miracle for the Panthers as they were able to sneak out a win against the Jackrabbits in the second half. Despite shooting only 34% in the first half, UNI came storming back for a 50% shooting fourth quarter in all areas for the 9-point victory.

“I loved the resolve and toughness we showed in the second half,” said Head Coach Tanya Warren of the game. “I thought our bench did a terrific job of getting us back in the game at the end of the 3rd quarter. It was an outstanding team win,”.

It was a slow start to the game as both teams missed jump shots in the first minute. The Jackrabbits would get the first basket of the game one minute in, but the Panthers would answer back the next possession with a jump shot from guard Karli Rucker. South Dakota State would get the next two baskets before the two teams went 4 minutes without scoring a single shot. Despite 42 attempted shots in the first, very few fell for either team as UNI took a last-second lead off a jump shot from Rucker.

The second quarter began with 8 back and forth baskets through just under 4 minutes of play. But the Jackrabbits would find their 3-point shot early in the second. SDSU went on a 5-point run midway through for their best scoring run of the 1st half. The Panthers would get in 2 more shots before the end of the first by guards Kam Finley and Emerson Green, going into halftime down by 6. This was the first game this season UNI did not score from behind the arc in the first half. It was also the first time the Panthers were shut out from behind the arc since November 20th of 2018 against Creighton at home.

But it would become a different story in the third quarter for UNI. Despite another slow start and surrendering a double-digit lead to the Jackrabbits at 6:20 in the 3rd, the Panthers would chip away at the lead over the last three minutes. UNI would be able to cut the lead down to 3 by the end of the quarter with a 10-point scoring run right before the last minute. The Panthers would also get their first 3-pointer of the game in the 3rd quarter when guard Maya McDermott made her first at 1:09, cutting the South Dakota State lead to just one.

UNI had their best quarter in the 4th, starting the last 10 minutes with a 5-point run and grabbing their first lead of the game since the beginning of the 2nd. But it would take the Panthers another 6 minutes to hang onto the lead for good as the Jackrabbits retook the lead at 8:28. It would be a jump shot from Green in the last 3 minutes that gave UNI their final lead change. The Panthers would close out the game at the free-throw line, making all but 3 of their last 8 shots from the charity stripe for the comeback 59-50 win.

Individually, the Panthers had four players score in double digits, led by Finley with 13 points. Center Cynthia Wolf was two rebounds shy of a double-double with 10 points and 8 boards. Other double-digit scorers included Rucker and Green. Forward Bre Gunnels made a season-high 4 blocks out of UNI’s 6 blocks.

NEXT UP:
It’ll be a quick turnaround for the Panthers as they welcome NAIA Graceland College to the McLeod Center on Monday evening. It will be UNI’s first game against the Yellowjackets since December of 1976. Tipoff on Monday is set for 6 p.m. from Cedar Falls. 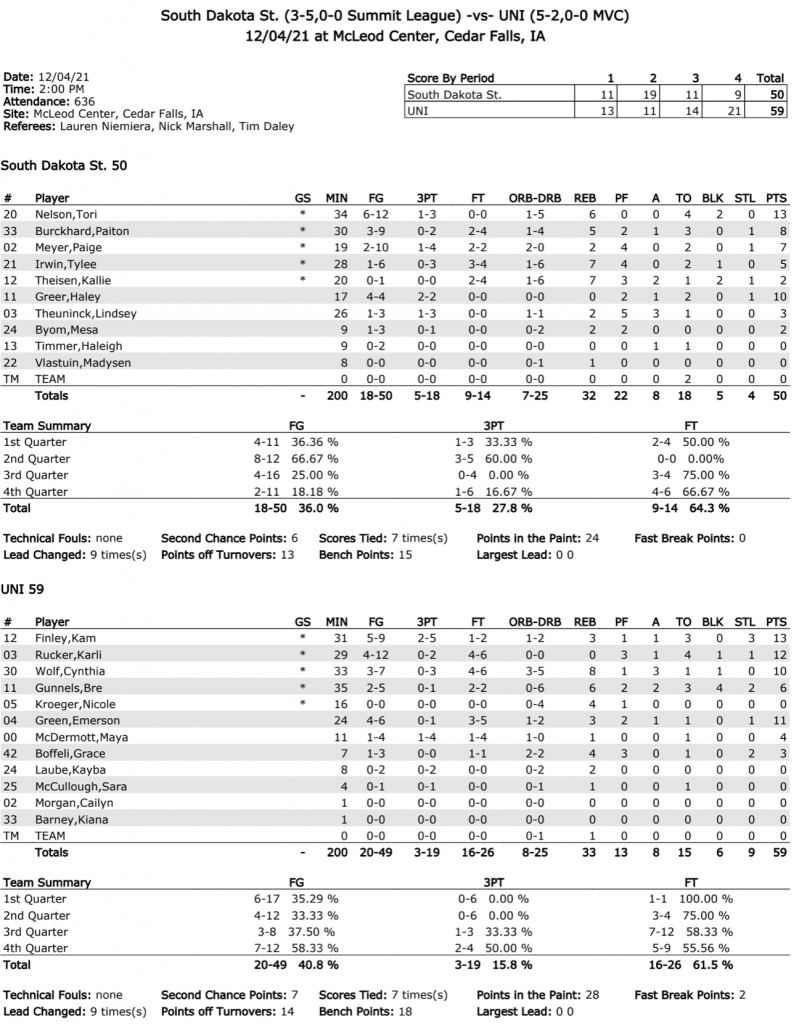