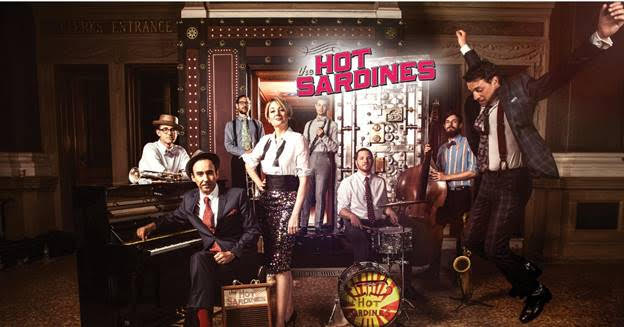 MASON CITY – The Hot Sardines Holiday Stomp will perform at the North Iowa Community Auditorium on the NIACC campus at 7:00 p.m. on Saturday, December 11, 2021. This presentation is part of the 2021-2022 Performing Arts and Leadership Series.

The Hot Sardines infuse yuletide classics with their unique twist on New York, Paris, and New Orleans jazz from the era of Prohibition and beyond. From beloved chestnuts like “White Christmas” and “Please Come Home for Christmas” to lesser-known gems such as Edith Piaf’s “Le Noël de La Rue,” Ella Fitzgerald’s “Santa Clause Got Stuck in My Chimney,” and even “The Dance of the Sugar Plum Fairy,” The Hot Sardines bring in the holidays with plenty of surprises along the way.

These mischief-makers of hot jazz started out playing underground speakeasies in Brooklyn, and now have toured nearly 300 cities throughout North America, Europe, and Asia, blowing out their vintage-on-steroids sound to crowds as big as 25,000.
They’ve hit No. 1 on iTunes Jazz, spent more than a year on the Billboard charts and racked up 25 million streams from fans worldwide on Spotify.

In the talented hands of the New York-based ensemble, music first made famous decades ago comes alive through their brassy horn arrangements, rollicking piano melodies, and vocals from a true artiste that transports listeners to a different era with the mere lilt of her voice.

Bandleader Evan Palazzo and lead singer Elizabeth Bougerol met in 2007 after they both answered a Craigslist ad about a jazz jam session above a Manhattan noodle shop. The unlikely pair – she was a London School of Economics-educated travel writer who grew up in France, Canada, and the Ivory Coast, he was a New York City born and raised actor who studied theater at the University of Arts in Philadelphia – bonded over their love for Fats Waller. Influenced also by such greats as Dinah Washington, Louis Armstrong, and Billie Holiday, they began playing open mic nights and small gigs.

“Everything in our DNA is about connecting with the audience. That’s where we feel most at home,” says Elizabeth, of playing live with the eight-piece band (including one wildly percussive tap dancer).

The Hot Sardines played more than 100 shows last year, taking their act from their familiar confines of New York across the country. And to no one’s surprise but their own, they were greeted by music lovers everywhere. “It never really occurred to me that anyone was listening to us outside of New York City. To show up in a town and have people say, ‘I love this song. I love this video’ is mind-blowing to me,” says Elizabeth, who adds she remembers the towns by the food, seeking out “whatever that region does really well – we’re constantly in the tour van, researching mom-and-pop places in the next town.”

In New York City, The Hot Sardines draw a young audience. In the rest of the country, multi-generations come to enjoy the music. “We’ll see daughters, mothers, and grandmothers coming to our show together,” Evan says. “In Long Island, a young girl came up to Elizabeth with a can of sardines to sign. She was 7!”

In the hot jazz movement, The Hot Sardines stand apart for the innovation, verve, and sheer joy they bring to music, both new and old. “It’s a really cool time to be making music,” Elizabeth says. “Especially if you’re making music that started its life 100 years ago.”

To learn more about the show, visit www.hotsardines.com or watch a video at www.niacc.edu/palvideos.