This news story was published on December 27, 2014.
Advertise on NIT • Subscribe to NIT 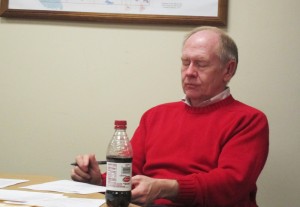 Supervisor Jay Urdahl taking a snooze during a Supervisor meeting.

Sources close to both sides of the North Iowa political scene tell NorthIowaToday.com that it increasingly appears that a well-regarded Republican may announce in 2015 that he will run against Cerro Gordo county Supervisor Jay Urdahl in the 2016 elections.

A former member of the county Democratic central Committee said that dissatisfaction with Mr. Urdahl has reached the point where he is the most unpopular Democrat who is presently serving in elective office in the county.  This dissatisfaction could mean Urdahl finally gets the boot from office after decades of sleeping through meetings and collecting big pay raises.

“Well, let’s see, here… there’s Amanda Ragan, Sharon Steckman, Carlyle Dalen, Patty Wright, Phil Dougherty, Alex Kuhn, and Colleen Pierce, and let me tell you, ALL of those Democrats are much better-liked than Jay is, or has ever been,” this liberal left-winger told NIT.  “Most Democrats just plain don’t like Urdahl,” the source said, on condition of anonymity.  “Don’t use my name, he’ll have my job,” she said.

This unpopularity is viewed as a weakness by Urdahl’s potential adversary.

Now, Jay Urdahl claims to be a Democrat.  Some say he is a Republican who pretends to be a Democrat.  He certainly has the left-wingers in North Iowa duped into believing he is one of them… or they are just playing along.  He gets invited (or shows up unannounced) to all their parties.  Sources tell NIT no one really talks to him and he just kind of wanders around aimlessly with a drink in his hand.  NIT has been told that some go out of their way to avoid Urdahl and has even been scolded right to his face for playing dirty politics. 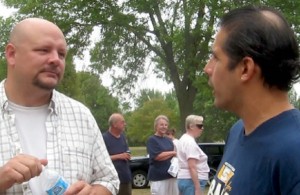 Even right-wingers like Travis Hickey have shown up at the annual Labor Picnic. Jay won’t go back ever since Hickey was blasted by hard-working blue collar folk in 2012.

Why bring that up?  Because Jay Urdahl may have alienated a few too many in his own party.  His support is deteriorating quickly as the Dem’s have watched Urdahl do little to support their cause over the years.  As an example, he regularly snubs the annual labor picnic.  People are cluing in that Urdahl is a true fraud when it comes to walking the walk for the Democrats.  Another insider has explained to NIT that a major backer of Urdahl’s previous campaigns – who happens to be a staunch right-wing Republican – is finished being Jay’s financial crutch.  Dr. Gary Blodgett won’t be there for Jay next time around, NIT is told.  Urdahl has, however, amassed a sizable war chest to do battle with in any election he may or may not partake in.

The problem is – and this is no secret – Urdahl is the biggest cheapskate in North Iowa.  In fact, he is known in the 9-county North Iowa area as a slickster who sometimes grabs tip dollars off the bar table when no one is looking.  One man told NIT that Jay Urdahl rode his bike all the way across Clear Lake one hot summer’s day  just to get his greedy mitts on an empty pop can so he could score the nickel.  True story. 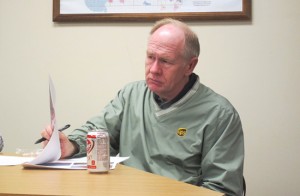 Urdahl is his own worst enemy and could hand the election to his coming nemesis if he won’t pony up his own dough to get re-elected.  He’ll have to look within himself and determine whether spending several thousand dollars, minimum, to seek re-election is worth the chance at keeping his $50,000 gravy train in operation.

As for this candidate who may very well topple Jay Urdahl, he is a well-known Republican who NIT won’t name just yet, but suffice it to say, the feelers are out there, and he wants Jay’s seat in the worst way.

Democrats active in the party are leery of Jay Urdahl because he is generally considered to be cheap, lazy, and takes advantage of the perks of his office. A Courthouse employee said, “Jay shows up in his office around 10:45 every morning, except on Tuesdays. That’s when the Supervisors have their meeting, so he’s there a bit earlier. He’s always out by 12 Noon, and doesn’t come back until the next day. He’s so cheap he won’t even subscribe to newspapers, and he reads the copies that we have delivered here, on the county dime, and on the county’s time.  The county pays for his phone and meals, you name it.”

A Mason City Republican who has been active in the county GOP for years shared some even more interesting information on this story with NorthIowaToday.com:

“A well-respected Republican who is active in community affairs is likely to run against Urdahl, and he’ll be a serious opponent,” the Republican told us. “Ever since Jay Urdahl took away that seat from us back in ’88 – with Gary Blodgett’s backing, of course – we local Republicans have wanted it back. Very much so.”

[Editor’s note: Republican John Fromm held the county Supervisor seat held by Urdahl, from 1980 to 1989. The seat had been held by other Republicans prior to Mr. Fromm]. 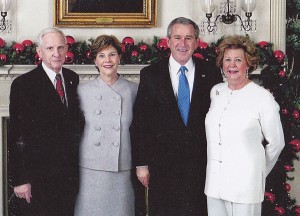 A longtime Mason City conservative activist said that in her view, it’s possible that Urdahl might not benefit from Dr. Blodgett’s active involvement if he runs again in 2016. “I know that Sandy [Mrs. Gary Blodgett] wants her husband to cease his political work. They’re both past 75 now, and we’ve heard he has some health issues. Sandy wants him to just hang it up, and call it a day, with politics. I can’t say I blame her.” Dr. Gary B. Blodgett is the former Deputy Majority Leader who served in the Iowa Legislature from 1992-2001, and a retired federal Administrative Law Judge. He was appointed by President George W. Bush. Gary Blodgett served in Washington, D. C. in the Bush administration from 2001 to 2008. He lives in Clear Lake, and is often referenced as North Iowa’s “Republican Patriarch”, and a “political Kingmaker” of sorts, who influences the outcome of many local races, both Primaries, and General elections. Urdahl has been heavily dependent on Blodgett’s financial generosity, personal endorsements, and the active role in his campaigns that Blodgett has played.

For Urdahl’s 2012 campaign, Gary Blodgett signed two letters supporting his re-election. Between the two letters, which were mailed to Blodgett’s personal friends and fellow Republicans, nearly $16,000 rolled into Urdahl’s campaign coffers.  Urdahl’s latest campaign committee report shows that $17,060.55 cash is on hand, according to reports filed with the Iowa Ethics & Disclosure Commission. 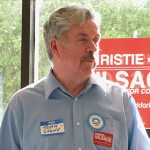 Another NIT reader who regularly attends meetings of the Cerro Gordo Democrats told us that “there’s friction” between Urdahl and party chairman John Stone.”  Urdahl wanted Stone to do all he could to make sure that Doug Nelson wouldn’t be nominated,” the source said. “Jay thinks Doug’s a joke. He told me that right to my face, right in my house. John Stone is a good chairman, but he can’t do Jay’s bidding.”

This man also shared his insights relating to the next election for Supervisor. “It may come as a surprise to Jay, but he might just find out he’ll need every bit of that money the Blodgetts have given him over the years, and helped him to raise.” 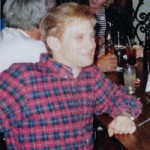 This Democrat, who identifies himself as “very liberal, and proud”, noted that while he “respects Dr. and Mrs. Blodgett”, he “is not pleased” that “Jay Urdahl is on friendly terms with Todd Blodgett” – who is the son of Gary and Sandy Blodgett. “I’m also not the only Democrat who’d like to see Jay pay for being friends with Todd Blodgett. If a moderate Republican runs” against Urdahl, the source said, “he or she will have my support.”

NorthIowaToday.com will keep readers informed as to any developments which may transpire regarding this potential race for county Supervisor, which will take place in the very next election.