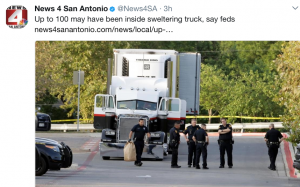 As many as 20 to 30 other people were still inside the sweltering semi-truck trailer, which was reportedly discovered when someone went inside the Walmart to ask for water.  The survivors were treated for heat-related health issues. There could have been as many as 100 people in the semi trailer at one point, reports say.

Texas Governor Greg Abbott said in a statement that “The loss of these lives is a heartbreaking tragedy. Human trafficking is an epidemic that Texas is working to eradicate. To that end, Texas will continue to provide protection for the victims who have been robbed of their most basic rights, and bring down the full weight of the law for the perpetrators of this despicable crime.”

Abbot’s office said that in May 2017, the Governor signed a law which provides information to the trucking industry about how to recognize and report signs of human trafficking.

“This tragedy demonstrates the brutality of the network of which I often speak. These smugglers have no regard for human life and seek only profits. The Department of Homeland Security and its partners in the U.S., Mexico and Central America will continue to root out these smugglers, bring them to justice and dismantle their networks. The dedicated men and women of U.S. Immigration and Customs Enforcement not only investigate and help prosecute horrific incidents like this but they and their U.S. Customs and Border Protection colleagues work hard day and night, 365 days a year, to prevent senseless deaths and injuries like these. They put their lives on the line to rescue and save the lives of those who attempt the treacherous journey north on the network of abuse and death.”

“By any standard, the horrific crime uncovered last night ranks as a stark reminder of why human smuggling networks must be pursued, caught and punished. U.S. Immigration and Customs Enforcement’s Homeland Security Investigations works year-round to identify, dismantle, and disrupt the transnational criminal networks that smuggle people into and throughout the United States. These networks have repeatedly shown a reckless disregard for those they smuggle, as today’s case demonstrates. I personally worked on a tragic tractor trailer case in Victoria, Texas in 2003 in which 19 people were killed as a result of the smugglers’ total indifference to the safety of those smuggled and to the law.

“The men and women of ICE are proud to stand alongside our law enforcement partners, including locally and at the U.S. Department of Justice, to combat these smuggling networks and protect the public and those who would fall victim to their dangerous practices that focus solely on their illicit profits. So long as I lead ICE, there will be an unwavering commitment to use law enforcement assets to put an end to these practices.”

Tragedy came to our doorstep. Our city prays for the victims & families. Thank you to fire, police & EMS who provided care to the survivors.

They'd still be alive, if we had a wall. At Least 8 Are Found Dead in Truck at Walmart Parking Lot in San Antonio – https://t.co/1hKnYmG4wy