This news story was published on March 28, 2021.
Advertise on NIT • Subscribe to NIT

CEDAR RAPIDS – A Waterloo man who left a halfway house in August 2020 for Chicago was sentenced March 25, 2021, to one year in federal prison.

Robert Donzell Luckie, age 22, received the prison term after a December 7, 2020 guilty plea to one count of escape from custody. At guilty plea and sentencing hearings, Luckie admitted that, in December 2018, he was a sentenced in the United States District Court for the Northern District of Iowa to 27 months’ imprisonment and a three-year term of supervised release after he was convicted of possessing ammunition as a felon. Luckie was released from federal prison in May 2020 and, after he violated the terms of his supervised release, was ordered to reside in a Waterloo halfway house for 120 days beginning on July 31, 2020. The very next day, Luckie left the hallway house without permission and fled to Chicago. Only four days later, on August 5, 2020, Luckie was arrested in a traffic stop by the Chicago Police Department.

In October 2020, Luckie was sentenced to 18 months’ imprisonment for violating the terms of his supervised release by escaping to Chicago. Later that same month, a federal grand jury returned an indictment charging him with one count of escape from custody.

Luckie was sentenced in Cedar Rapids by United States District Court Judge C.J. Williams. Luckie was sentenced to 12 months’ imprisonment, which Judge Williams ordered to run consecutively to Luckie’s 18-month sentence for violating the terms of his supervised release. He must also serve a new three-year term of supervised release after the prison term. There is no parole in the federal system. Luckie is being held in the United States Marshal’s custody until he can be transported to a federal prison.

The case was prosecuted by Assistant United States Attorney Tim Vavricek and investigated by the United States Marshal’s Service. 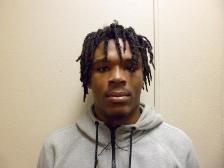