This news story was published on March 1, 2020.
Advertise on NIT • Subscribe to NIT

The win ends a three-game losing skid by the Cyclones.

Joens, who had a game-high 29 points, came up big in the clutch to allow the Cyclones to gut out the victory without one of their star players, Kristin Scott, who was sitting out with a back injury.

Joens was 8-of-8 from foul line in the final period, including four-straight in the final :20 seconds to stage the come-from-behind win. She also grabbed 13 rebounds to record her 16th double-double of the season.

Her free throws proved important, as West Virginia had a chance to tie the game with the final possession. Clinging to a 61-58 lead, Kysre Gondrezick misfired on a 3-pointer, but Tynice Martin grabbed the rebound, scored and was fouled as the horn sounded.

However, the officials looked at the replay and waved off the basket to allow the Cyclones to escape.

Joens had help from Inès Nezerwa, who started in the place of Scott. Nezerwa responded by scoring 14 points and grabbing nine rebounds.

How It Happened
Esmery Martinez helped West Virginia take a 21-17 lead after the first quarter by scoring 10 points on 5-of-5 shooting from the field. Joens had nine first-quarter points to pace the Cyclones.

The WVU lead remained at four points (33-29) at the break. The Mountaineers led by as many as seven points in the second quarter, but the Cyclones were able to cut the deficit with a couple of late hoops by Joens, including a lay-up at the buzzer thanks to a nifty feed from Madison Wise.

WVU moved ahead by seven points at the beginning of the second half until a 7-0 Cyclone run tied the game at 39-39 with 5:30 left in the period. Maggie Espenmiller-McGraw hit Nezerwa for a lay-up on a back cut to start the run and Adriana Camber knocked down a corner trey to make it a tie game.

The Mountaineers ended the final stanza clinging to a 50-47 lead.

With a pair of baskets from Joens to open the fourth quarter the Cyclones were able to forge their first lead since the first period at 51-50 with 7:11 left in the game.

Madisen Smith switched the lead back in favor of WVU with a pair of jumpers, as the Mountaineers held a 58-57 advantage with under two minutes remaining.

Both teams couldn’t score on their next two possessions and the Cyclones had the ball with under :30 seconds left with a chance to retake the lead. They got it when Joens made two free throws with :19 seconds remaining. Joens then got a big rebound with :11 seconds left after Martin missed a jumper.

Joens was fouled again and tacked on two more charity shots to give the Cyclones a 61-58 lead in the closing seconds.

Players of Note
Inès Nezerwa was inserted into the starting lineup with the absence of Kristin Scott and had a solid game. She tallied 14 points on 6-of-11 shooting en route to her ninth double-digit scoring effort of the season.

Ashley Joens scored 12 of her 29 points to pace the Cyclones to victory. It was her 16th 20-point game of the season. She 13-of-14 at the free-throw line, including a perfect 8-of-8 in the final period. She also grabbed 13 boards en route to her 16th double-double of the season. 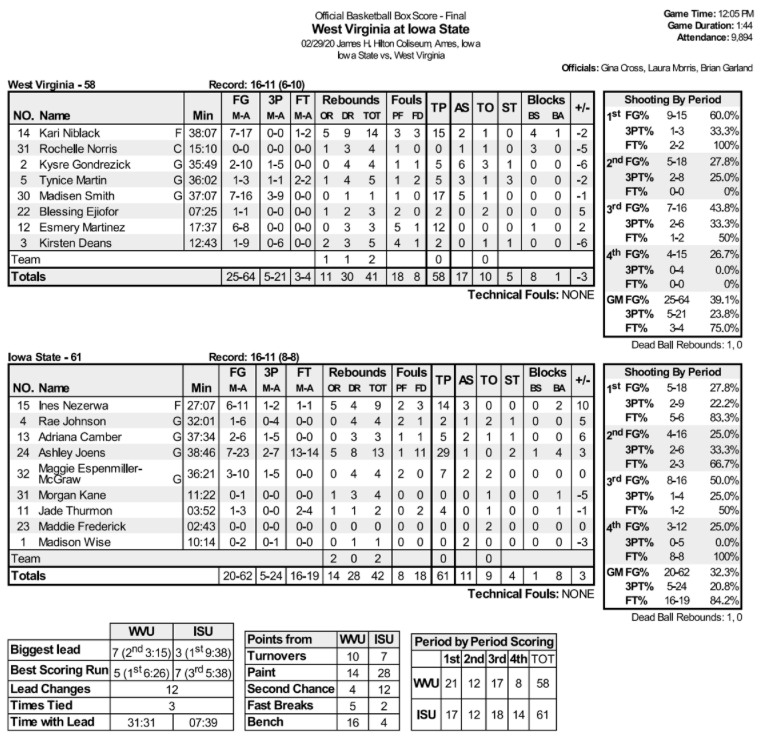