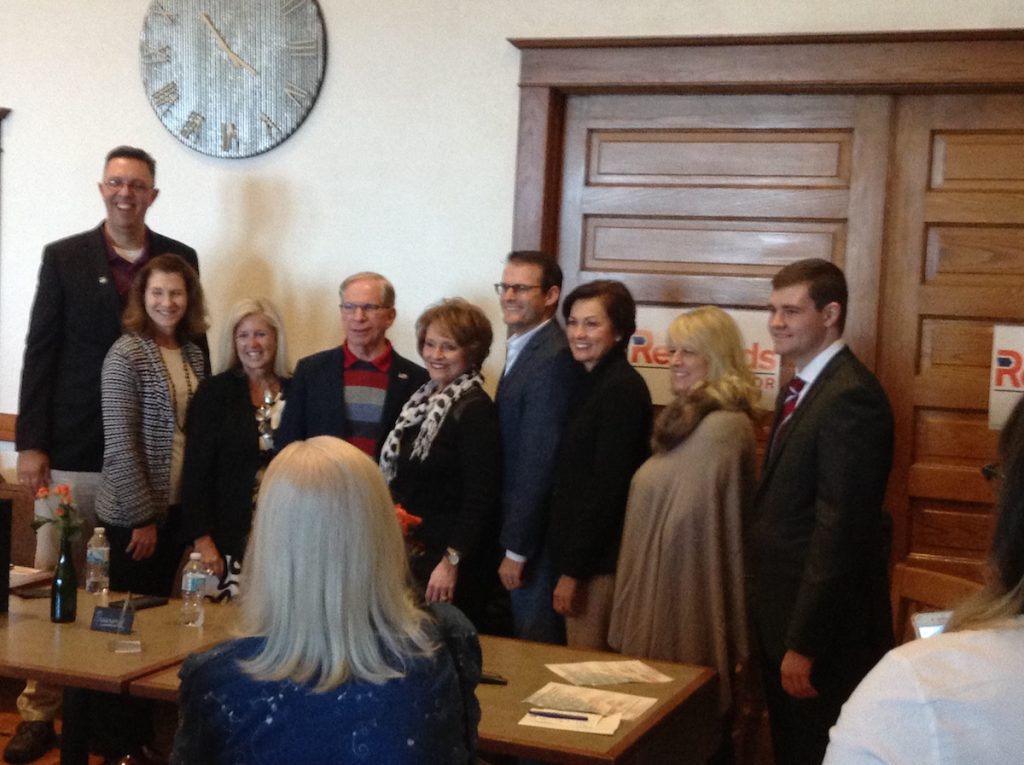 The event was held Saturday afternoon, October 28 at the K & B Emporium, located at 8 North 4th Street in downtown Clear Lake.  Minimum ticket prices were $35 up to $500.  Some local-level elected leaders were in attendance, including Mayor Nelson Crabb of Clear Lake and Cerro Gordo county supervisor Chris Watts.  Light snacks were offered along with a cash bar.

U.S. Senator Charles Grassley spoke to the gathering of GOP faithful first. Touching on many issues, he said the real Russian scandal is unfolding right now, involving Hillary Clinton and a uranium deal to the Russians during the administration of Barack Obama. The GOP-led investigation is now heating up, and could implicate Clinton in nefarious activity. Grassley also said that he believes a tax cut plan led by President Donald J. Trump is likely to pass yet this year. He and other legislators in attendance agreed, if that federal tax cut passes, the state’s budget will be in better shape, as state coffers will reap a benefit.  He also apologized for “turncoat” GOP Senators who sabotaged the repeal of Obamacare.

RPI Co-Chair Cody Hoefert spoke to the crowd and made a point to say that Democrats are being “eradicated” from state and local government.  He specifically mentioned Mason City Democrat and State Senator Amanda Ragan as a target. At the mention of Senator Ragan’s name, nearly all eyes turned to Steve Minert, who was one of the event’s sponsors. For months now, substantial speculation has centered on Minert’s possible candidacy against Ragan. Mr. Minert and his father, Ron Minert, own Harley-Davidson dealerships in Mason City and Charles City. Top GOP strategists in Des Moines view Minert as a likely winner in a race against Ragan.

Mr. Hoefert said Iowa Republicans will continue to support Donald Trump, Steve King, Grassley, Senator Joni Ernst and other GOP leaders.  He noted that liberals no longer talk about the “war on women” as he rattled off accomplishments by women in climbing to leadership positions in government in Iowa, like Senator Joni Ernst, Governor Reynolds (Iowa’s first female Governor), and Upmeyer (House Speaker).

Also addressing the crowd was Auditor Mary Mosiman.  Locals in the crowd whispered that they have great faith in her department and the possible outcome of an investigation into possible nefarious activities in the Mason City School District by former administrators.  Mrs. Mosiman explained that her office has one motto: “In God we trust – everyone else, we audit.”

Representative Linda Upmeyer told the crowd that she is frustrated that Democrats keep asking for more and more dollars for education, even as Republicans work with the left to approve education budget increases year after year.

Lt. Governor Adam Gregg said in Iowa, “you can have it all” and Republicans want to help keep it that way.  In leading up to his intro for Governor Kim Reynolds, he said no one, ever, has been more qualified to take the top spot in state government than Reynolds.

Governor Kim Reynolds said her discussions with President Donald Trump have been fruitful; through her lobbying, he has pledged to stay the course with support for the Iowa Renewable Fuels Standard, for example.  She (and Upmeyer) both talked of Iowa’s need for a more-skilled workforce and the steps being taken to get there.  The lack of skilled workers, they claim, is holding back Iowa business growth at all levels.  This is a claim that has been made by Democrats, as well.  See the video, below, for more from the Governor.

North Iowa Republicans are on a roll, particularly in Cerro Gordo county. In last fall’s election, Republican challengers defeated longtime county Supervisors, Democrats Jay Urdahl and Phil Dougherty – who, between them, had 44 years of service. State Senator Mary Jo Wilhelm was defeated by Waylon Brown in a landslide. Senator Brown now represents Iowans in Cerro Gordo, Floyd, Chickasaw, Mitchell, Howard, Worth, and Winneshiek counties. For the first time since 1972, the GOP presidential nominee, Donald Trump, carried Mason City. NIT spoke to Todd Blodgett, whose family has been synonymous with north Iowa GOP politics for over over 45 years.

Blodgett, who served on President Reagan’s White House staff, said, “There’s an anti-incumbent, anti-Liberal, anti-career politician wave coursing throughout north Iowa. This was evident last year and the sentiment still favors Republicans. Kim Reynolds will hold the governorship in 2018 and Republicans will gain state legislative seats in both houses.”

Blodgett, who was one of the few Republicans who foresaw Trump’s upset victory over Hillary Clinton, was seen talking with Steve Scheffler and Tamara Scott, who are Iowa’s elected national committee members of the Republican National Committee.