Cyclones’ magic ends in Sweet 16 with bite from Huskies 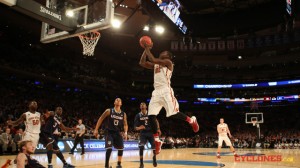 Melvin Ejim ended his illustrious career as a Cyclone with seven points and eight rebounds. The senior, who will go down as one of the all-time greats in school history, registered 1,643 career points and 1,051 rebounds, becoming just the fourth player in Big 12 history with 1,500 points and 1,000 rebounds.

DeAndre Kane concludes his one-year stint with the Cyclones with 2,110 points, 743 rebounds and 645 assists becoming the only player in NCAA history to reach that mark.

The Huskies would jump out to an early 25-16 lead after going 6-of-9 from three in the first 12 minutes of the game. The UCONN lead would grow to as much at 10 points, 34-24, by the under-4 timeout. In the first half, the Cyclones did not have an answer for Shabazz Napier or Ryan Boatwright, who together scored 22 of UCONN’s 36 first-half points. Napier went 4-of-5 from deep as the Huskies shot 58.3 from long range and 51.9 percent from the field in the first half to take a 36-26 lead over the Cyclones.

The shooting woes would continue as the Huskies would extend their lead to as much as 17, 49-32, with 14:19 remaining in the second half. Iowa State would mount a feverish comeback after going on an 11-2 run to close the gap to just seven, 63-56, with 4:29 remaining. Both teams would go bucket-for-bucket until Naz Long scored five consecutive points to cut the Huskies’ lead to just five 70-65 with 1:34 remaining. The Cyclones would be unable to overcome the Huskies offense, falling 81-76.