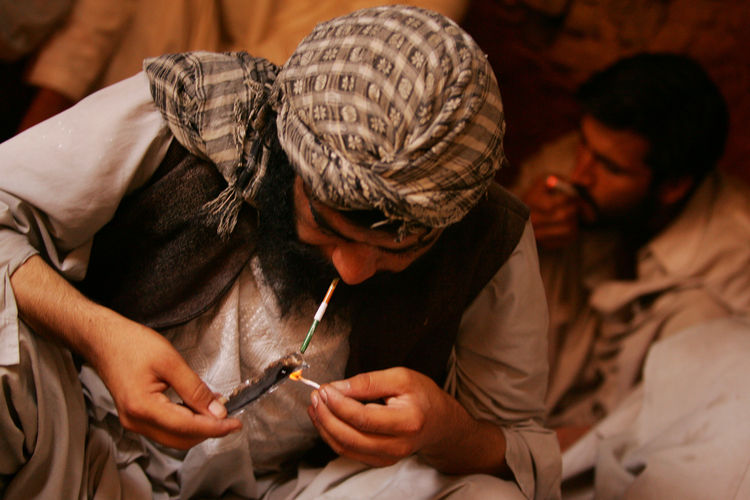 KABUL – Afghanistan’s Ministry of Interior (MoI), under its National Drug Control Strategy, has planned to reduce poppy cultivation and opium production by 50 per cent in the next five years and gradually make the country poppy-free in the next decade.

Presenting its plan at a donor conference ‘Challenges for Counter-Narcotics Efforts and Continuation of International Community’s Assistance’ in the capital, Kabul, on Monday, MoI officials said these targets would be achieved by implementing the country’s Counter-Narcotics law, Joint Law Enforcement Policy of Ministry of Counter-Narcotics, increasing the capacities of counter-narcotics police, increasing operations, targeting major networks, mafia and smugglers, and major heroin and morphine processing labs.

Afghanistan accounted for 74 per cent of the global opium production in 2012, according to a UN report released last year.

In his comments at the conference, attended by representatives of the international community and Government officials, the UN Secretary-General’s Special Representative for Afghanistan, Ján Kubiš, said the country, which is the largest producer and cultivator of opium in the world, needs to have an integrated approach across Government sectors to address the problem. He said Afghanistan should mainstream counter-narcotics agenda in its overall post-2014 development plan.

Mr. Kubiš also emphasized that the National Drug Control Strategy and the National Development Strategy should be put together and implemented to promote licit economy and development.

In its plan, the MoI said it will strive to boost regional and international cooperation in order to launch a counter-narcotics fight, besides reinforcing border control through better coordination.

Responding to the call of the MoI to donors for paying more attention to counter-narcotics efforts, the UN envoy said a new development conference is planned towards the end of this year to carve out a blueprint of cooperation between the donor community and the new Afghan Government that would be elected after the 5 April elections. He called for mainstreaming counter-narcotics efforts in the overall development agenda of the upcoming development conference.

In his comments at the conference, the Minister of Interior, Mohammad Omar Daudzai, called for “increased cooperation” in the counter-narcotics sector from the international community.

“We cannot do much without genuine and well-committed partnership,” said Mr. Daudzai. “Narcotics was as much our enemy as the terrorism.”

While expressing his Government’s commitment to fight narcotics and terrorism, the Minister said both these menaces have hit hard the Afghan youth, society, economy and the administration.

The Deputy Minister of Counter-Narcotics at the MoI, Baz Mohammad Ahmadi, said that drug problem has direct connection with insecurity, instability and ongoing conflict.

“Narcotic is not only a major source of funding for terrorism and organized crime but also a major source of increasing drug addiction and diseases as well as a key impediment in rule of law and good governance,” said Mr. Ahmadi.