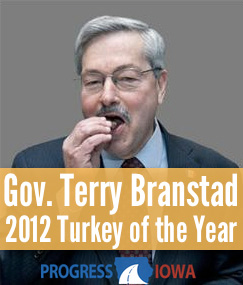 DES MOINES – Progress Iowa today announced Governor Terry Branstad the recipient of their ‘Turkey of the Year’ award, highlighting his efforts to mislead Iowans, his failure to keep his campaign promises, and his attacks on the middle and working class in our state. In honor of his distinction as ‘Turkey of the Year’ Progress Iowa will donate a turkey to the Food Bank of Iowa located in Des Moines.

“Iowans are tired of Terry Branstad’s political games,” said Matt Sinovic, executive director of Progress Iowa. “He says one thing, then does another. He uses his administration to fudge the facts, instead of doing what’s best for Iowa.”

“Many competed for the award, but Governor Branstad went above and beyond all year to earn the dubious distinction of being named our first-ever ‘Turkey of the Year’,” said Sinovic. “Branstad attempted to mislead us about the number of jobs being created in Iowa, was overruled by the Iowa Supreme Court when he attempted to go after working Iowans, and he was called out on national television for lying.”

Among Gov. Branstad’s 2012 activities that contributed to his receiving the ‘Turkey of the Year’ award:

– After failing to make significant progress toward his promise to create 200,000 new jobs, Branstad decided to fudge the numbers, inflating his ‘job creation’ count by simply not counting any job losses;

– In the heat of the presidential campaign, Branstad once again mislead Iowans and Americans, this time about welfare reform. Thankfully he was called out for his dishonesty. Unfortunately, he once again poorly represented our state;

– Instead of leveraging federal ta dollars for the benefit of our state, Branstad’s political decision to oppose Medicaid expansion puts at risk 150,000 Iowans who rely on the program for health care;

To mark the occassion of the first ever ‘Turkey of the Year’ award, Progress Iowa will send a printed copy of this press release along with an official congratulatory notice to Governor Branstad.