This news story was published on January 27, 2014.
Advertise on NIT • Subscribe to NIT 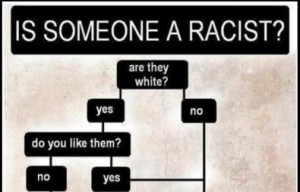 NIT – The Republican party might have finally “got it” in the wake of publishing a controversial “is someone a racist” flowchart to its Facebook page, after it has apparently fired the man responsible for the post.

Shane Vander Hart of Des Moines, a blogger and self-prolaimed “Follower of Jesus” admitted that he was the man behind the offensive graphic, which was published to the Iowa Republican Party’s Facebook on Friday, January 24, 2014.

He then wrote a detailed explanation of his action on his website:

I wrote accompanying the post above “Because it’s Friday night and we don’t need serious political posts on Friday night we are sharing this. Happy Friday and LIKE and SHARE! Unless you think the chart is racist, then don’t.”

It was an attempt at humor which perhaps would have been ok for my personal page, but not for the Republican Party of Iowa. My intent was to make light of how the race card is often played in American politics, regardless of my intent it was inappropriate. It was an error in judgment, one I deeply regret, and take full responsibility for. I apologize to those whom I offended, as well as, to Iowa Republicans. This is not the message we need to send. It is distracting to our mission of electing Republicans. I also would like to publicly apologize to A.J. Spiker for the problems this has caused him.

I did not mean to cause offense or to be disrespectful, and again I am truly sorry.

I have had the opportunity to talk with my kids in terms of how important it is to be careful about what we post on social media and to use this example of what not to do. Granted mistakes most people make won’t cause a media firestorm, but they can carry negative consequences regardless.

As of this morning my working relationship with the Republican Party of Iowa has ended. I completely understand their decision and I wish them all the best.

Showing that he can dish out nastiness but not necessarily take it, Vander Hart then closed the comments on his post.

Update 1/26/14 5:39p: Comments have been closed as they were getting out of hand by people who could not follow a simple comment policy. No personal attacks. No vulgarity. Stay on topic. It seems as though some folks don’t know how to leave a comment without personally attacking the person they are replying to in the comment or attacking me. This is my website, I pay the bills here. I don’t have to put up with it.

“It’s a start but still not good enough. Mr Spiker needs to step down and resign,” Byrnes said in a surprising;y pointed remark to a member of his own party.

A. J. Spiker is the State Chairman of the Republican Party of Iowa.

A call was placed to Gabe Haugland, Cerro Gordo County Republican Party Chairman, at his place of employment – First Citizen’s National Bank – to ask for a response, but Mr. Haugland did not take the call. However, he did reply via email saying “I denounce the flow chart.”