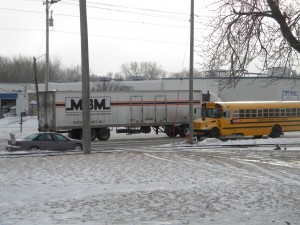 Traffic was reduced to two lanes on 19th Street SW in Mason City Wednesday after a semi driver missed his turn and slid, blocking cars and a school bus

MASON CITY – A wind chill warning is now in effect for much of North Iowa and surrounding areas. Winds of 30 to 40 mph are expected to continue. Wind chills will be 20 to 40 below zero.

Reports of white-out visibility in rural areas and along roadways have been streaming in throughout the day. Numerous accidents due to blowing and drifting snow combined with the poor visibility are causing event and school postponements and cancellations.

In Mason City, all Parks & Recreation activities for Wednesday evening have been cancelled. School is cancelled for Thursday. City Sanitation Crews will be picking up sanitation on normal routes tomorrow, Thursday, January 23.

The NIACC campus is open and the Addams Family performance is on, as-scheduled. The NIACC Lifelong Learning Institute Coffee Kick-off scheduled for tomorrow morning (Thursday, January 23, 2014) has been cancelled due to the weather.