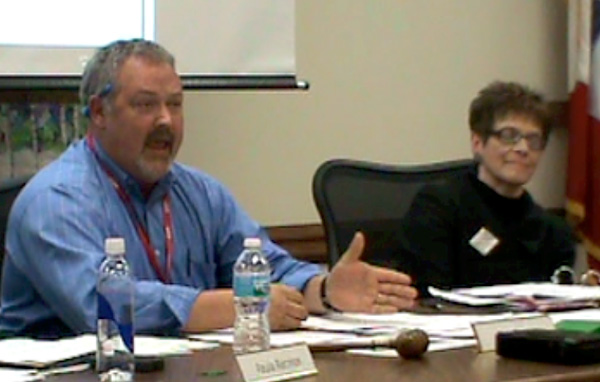 MASON CITY – In what he called an “editorial”, Mason City School Board President Tim Becker blasted the 1100 people who signed a petition to force the school district to hold a vote on levying new taxes on the people of Mason City.

“The Instructional Support Levy, that has been voted down twice, that is going to go to a vote again, because people either don’t understand the need or flat out want to be obstructionists.  This is money that … goes right to the general fund.”

Arguing for passage of the levy, Becker claimed that property tax assessments in Mason City have gone down 25% in the last two years.

“Property tax assessments have gone down 25% in the last two years” in Mason City, Becker claimed to a large crowd Monday evening as the board considered cuts  to educators and coaches.

According to City Assessor Dana Naumann, “property tax assessments have not changed over the last two years. They have stayed the same. With new construction, if anything, there have been increases.”

Naumann also said that the real estate market in Mason City has “rebounded” to pre-recession levels.

“As a whole, overall, in the last 5 years, values probably dropped off prior to that (due to recession), but over the past five years, property values have rebounded to pre-recession levels,” Naumann said.

Becker’s seat on the school board is up for election this year.