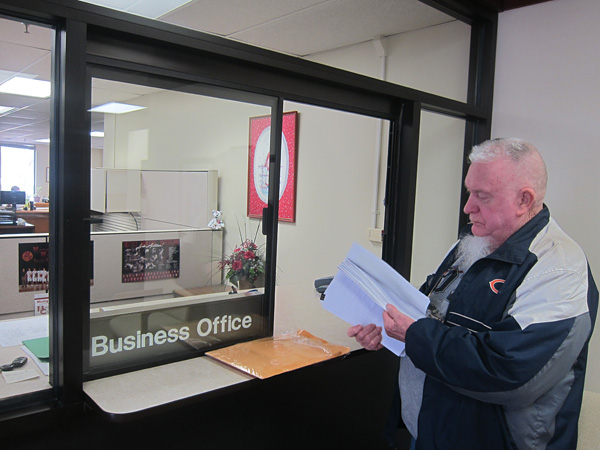 MASON CITY – At 79 years of age, Korean War veteran Jack McCourt does his best to fight for what he believes in. A pacemaker in his chest doesn’t help either.

Mr. McCourt, as a military man and a volunteer in the Honor Guard – which performs at military funerals to show respect for veterans – believes and lives by the rule of law, down to the letter.

So when Mr. McCourt was forced to make three trips to the Mason City School Administration building on Monday to turn in a petition with nearly 1,100 names on it, he was understandably agitated. Mr. McCourt was not about to hand in a petition to the wrong person, as the law specifically dictates that school petitions must be turned into the school board financial secretary.

Mr. McCourt had worked for weeks to gain the required minimum of 594 signatures to force the Mason City School District to take a new tax issue to the voters instead of simply allowing the tax to go on the books after the school board approved it last month.

“Somebody has to look out for the poor and elderly,” McCourt said Monday.

McCourt went to the school administration building Monday at 10:30 AM and no one was available to take the petition. He was told then to come back at noon, as Ramona Jeffrey – the designated person to accept the petition – would supposedly back in the building then.

When McCourt came back at noon, Jeffrey was not there.

Finally, at just before 1 PM, McCourt made his third trip to the administration building and Jeffery was there and accepted Mr. McCourt’s petition.

Jeffery said that the petition would be looked over for accuracy but that “if you have this many signatures, we would take it to a vote.  We have no problem going to the voters.”

A vote on the Instructional Support Levy can be expected in June or September, when the regular School Board election will be held.

Mr. McCourt thanked all the Mason City citizens who signed the petition. He also said that whatever the outcome of the vote, he was just glad that the people of Mason City will get a chance to vote on the issue.