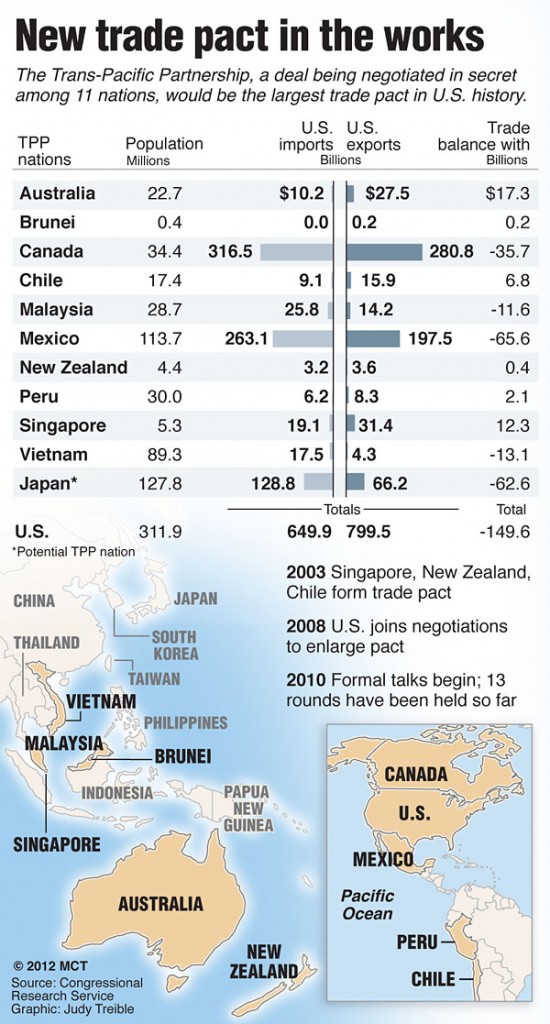 LEESBURG, Va. — With 1,350 employees in its five U.S. factories, New Balance is proud that it still produces 7 million pairs of shoes each year at its plants in Maine and Massachusetts, the last major athletic footwear company that still has manufacturing jobs in the United States.

But the company says those jobs could very well disappear if the U.S. scraps its tariff on athletic footwear coming in from Vietnam.

It’s part of the mounting anxiety caused by the new Trans-Pacific Partnership, the largest trade pact proposed in U.S. history. And as 400 negotiators from nine countries met privately at a golf resort in northern Virginia last week in an attempt to finalize details, New Balance officials weren’t the only ones fretting.

Autoworkers feared the loss of 26,500 domestic jobs and said the production of American cars would fall if Japan joins the pact and the United States drops a 2.5 percent tariff on Japanese cars, making them cheaper to buy.

Doctors worried that it will be harder to get medicines to fight AIDS and other diseases in developing countries if U.S. negotiators insist on extending patents for pharmaceutical companies.

And many members of Congress and other critics lamented that such big decisions were being made in secret meetings, at a luxury resort in the Potomac River Valley, far from public view.

But while opponents derided the new trade pact as “NAFTA on steroids,” a reference to the huge North American Free Trade Agreement passed by Congress in 1993 that opponents say led to U.S. jobs moving to Mexico, backers predicted the Trans-Pacific deal would increase U.S. exports, create more jobs and lower prices for American consumers.

Negotiations include nine countries: the United States, Australia, Brunei, Chile, Malaysia, New Zealand, Peru, Singapore and Vietnam. Mexico and Canada will soon formally join the talks, bringing the total membership to 11 countries. Japan already has expressed interest in participating, and China is regarded as a potential partner down the road.

“It’s NAFTA on steroids in terms of its geographic scope, its economic scope and the new powers it gives to corporations,” said Arthur Stamoulis, a critic of the trade deal and executive director of the Citizens Trade Campaign, a coalition that includes labor and environmental groups.

The deal is an attempt to get the United States to cash in on a region that accounts for more than 40 percent of all international trade. In addition to eliminating many tariffs, negotiators hope to reduce regulations and the cost of trade, to promote more digital and “green” technology, and to come up with rules on a wide variety of topics, addressing everything from sanitary standards to customs procedures to environmental issues. The Asia-Pacific region is an increasingly important market for U.S. businesses, accounting for $775 billion in exports in 2010, a 25.5 percent increase from just a year earlier.

In a speech in Russia on Sept. 8, Secretary of State Hillary Clinton said the deal marked a major push by the Obama administration to open new foreign markets and reduce barriers to trade, which she said would lead to “more and better growth.” She said it’s part of the president’s plan to advocate for U.S. businesses and to double the nation’s exports during a five-year period, from the year that Obama took office in 2009 to 2014.

Negotiators concluded their 14th round of talks Saturday, wrapping up 10 days of meetings at the Lansdowne Conference Center in Leesburg. The talks are expected to continue into next year, with the next round of talks set for Dec. 3-12 in Auckland, New Zealand.

In the middle of the Leesburg talks, Kirk went to Maine to tour a New Balance factory, seeking to quell the fears of company executives. Guthrie said that U.S. negotiators “know that footwear is a sensitive issue for the United States,” and that it’s important to gather input from affected companies to help shape the talks.

Matt LeBretton, public affairs director for Massachusetts-based New Balance, said the number of U.S. manufacturing jobs in the athletic shoe industry already has dwindled from more than 50,000 three decades ago to fewer than 3,000 today.

“For us the big message is: Hey, we’ve been doing this here when everybody left,” he said. But he said the company, which reported worldwide sales of more than $2 billion last year, will have a hard time competing with Vietnam and its low-paid workers if the United States removes its tariffs, which range from 10 percent to 38.5 percent, depending on the type of shoe.

Stamoulis said that with Vietnamese workers earning only a third to a half of what a typical Chinese worker makes, he worries that the latest trade agreement will continue a “race to the bottom.”

“They’re one of thousands that would be facing increased competition from countries that are known for having sweatshop labor,” Stamoulis said. “First the jobs move from the United States to Mexico under NAFTA. Then under the WTO (World Trade Organization) they move from Mexico to China. And now they’re moving from China to Vietnam. And each time the workers get paid less and less. … How are you supposed to compete with that?”