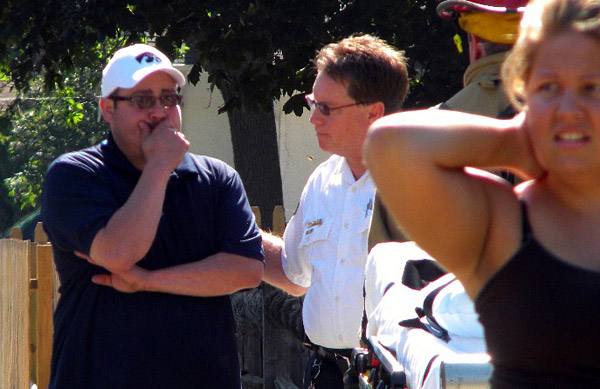 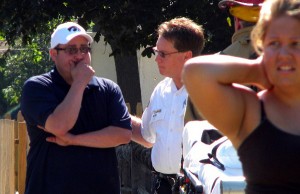 MASON CITY – Close to 9:00 a.m. Saturday morning, Niko Bombella called the Mason City Fire Department from outside his parents house, 1121 2nd St NW, where he was sleeping, saying that the house was filled with smoke and that he saw flames. He didn’t know if his parents where in the house or not.

(PHOTO: Steve Bombella is consoled by MCFD Chief Bob Platts at the scene of a fire at Steve’s home.)

Steve and Ann Bombella were not inside the house.  Danny and Alyssa, siblings to Niko said, “They are at the grocery store and they don’t have cell phones. They have no idea what’s going on.” Alyssa went on to say, “The two girls, my nieces, that live here are at a buddy’s house.”

There were two dogs missing. One was rescued, but the other one was still missing when the Bombella’s made it home. “How did this happen,” was Ann’s first reaction. Then finding out that one of her beloved pets was still in the house, panicked, and tried to go into the house. 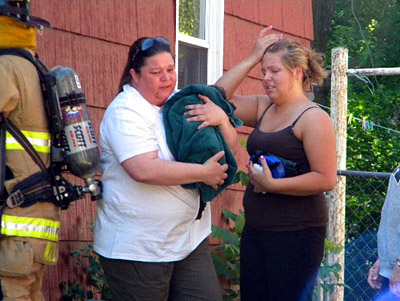 The Firefighters could not let Ann in the house, but Ann and Alyssa went to the side window and called out Misti’s name. “All mom wants is to get her pet, nothing else matters right now.” After a few minutes, they pulled the last pet out of the smoky house.

(PHOTO: Ann Bombella carries her dog Misti away from her home as firefighters make sure the fire is out.)

Steve was seen giving his son Niko a thankful hug, thankful that everyone was alright.

There was little evidence of the fire outside the house, but Alyssa explained the inside, “As we felt around for a towel or something to wrap her (the pet) in, all we could feel is soot. Everything was black, everything was smoke damaged. I just bought the girls new beds and a bedspread, they were white, but they aren’t now.”

Fire Chief, Bob Platts, was at the scene investigating. A neighbor walked up and said, “My sister had a fire, an electrical fire, this smells the same. I bet it was electrical.”

“We’re going to the vets,” said Alyssa. “They need to be checked out.” 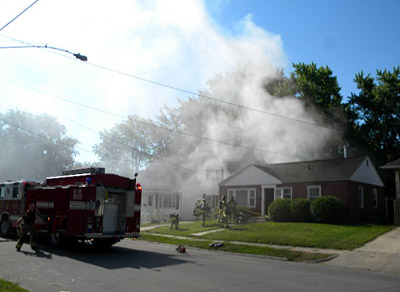