No injuries in six car pileup in Clear Lake Friday 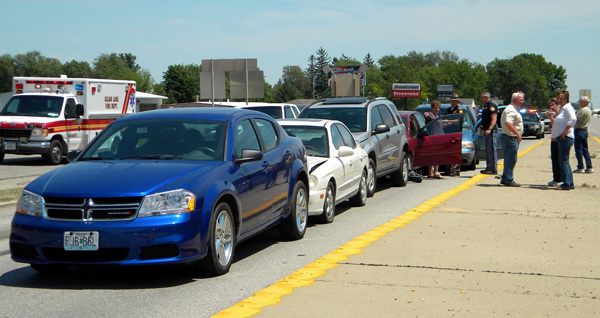 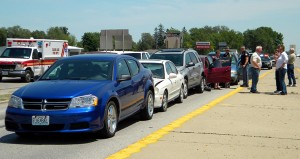 In front of Breadeaux Pizza, located at 910 Highway 18 in Clear Lake, six vehicles were bumper to bumper in perfect alignment on the inside lane by the median. There were four cars, a minivan and a SUV involved in the incident.

At the time of the call, it was unknown if there were any injuries, but airbags had been deployed. The Clear Lake Fire Department Ambulance was at the scene, but nobody needed medical attention.

A friend of the mother of the male driving the black car in back said, “He’s sore, he’s still sitting in the car.” Later the male was seen getting out of the car and walking away from the accident.

An onlooker said, “The police officers went around asking everyone if they had seen or heard anything, but nobody gave any statements.”

A comment was made, “I’m from Clear Lake, but I don’t recognized any of these cars.” Taking a closer look, three of the vehicles, the red Malibu, the white car and the gray Chevy SUV were from Hancock County, the Blue Windstar van was from Polk County and the lead blue car was from Missouri.

The first four vehicles were able to drive away from the accident and park to the side, the last two had to be taken on a flatbed provided by Happy Trails Wrecker Service out of Clear Lake.

The Iowa State Patrol was there to assist.