Gingrich to charge supporters $50 for photo with him 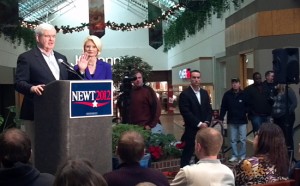 Newt Gingrich’s campaign says that a new policy to charge supporters $50 to take a photo with the GOP hopeful is really a way to showcase the grassroots strength of his shoestring campaign.

Reporters traveling with the former House speaker on Monday took note of the new paid photo policy, observing that he had long taken photos with people attending his events for free.

A campaign spokesman said that Gingrich will continue to do so when he works the rope-lines after he speaks. But a “new tactic” is to make a special appeal to supporters for a more formal photo opportunity, in return for a modest contribution.

R.C. Hammond, the spokesman, said some campaigns “make you travel all the way to Wall Street to pay $2,500 for a photo.”

“Every dollar and every supporter count, and our campaign is propelled forward one small donor at a time,” he said.

The campaign could use the dollars. Gingrich raised just $2.6 million in February and spent $2.8 million, leaving him with $1.54 million in cash and $1.55 million in debt.

His campaign is benefitting from continued infusions of money into a “super PAC” backing his campaign, mostly from casino magnate Sheldon Adelson and his family. The Adelsons gave $5.5 million to Winning Our Future in February, bringing the total to $16.5 million.

Gingrich acknowledged his tight finances Tuesday during a stop in Annapolis, Md., but maintained that he’ll have enough to stay in the race until the national convention in Tampa this August.

“Clearly, we’re going to have to go on a fairly tight budget to get from here to Tampa,” he said.