WASHINGTON, D.C. – The Muslim nation of Iran gunned down an American drone and President Donald Trump mercifully called off a retaliatory strike minutes before it was to take place, allegedly saving the lives of dozens.

President Donald Trump said Friday that on Monday, Iran “shot down an unmanned drone flying in International Waters. We were cocked & loaded to retaliate last night on 3 different sights when I asked, how many will die. 150 people, sir, was the answer from a General. 10 minutes before the strike I stopped it, not proportionate to shooting down an unmanned drone. I am in no hurry, our Military is rebuilt, new, and ready to go, by far the best in the world. Sanctions are biting & more added last night. Iran can NEVER have Nuclear Weapons, not against the USA, and not against the WORLD!” 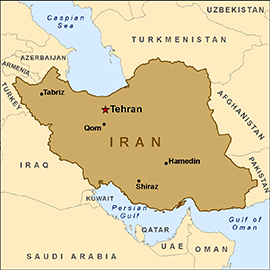 President Trump also blamed former President Barack Obama for making Iran a bigger threat, tweeting that Obama made “a desperate and terrible deal with Iran – Gave them 150 Billion Dollars plus I.8 Billion Dollars (sic) in CASH! Iran was in big trouble and he bailed them out. Gave them a free path to Nuclear Weapons, and SOON.   Instead of saying thank you, Iran yelled Death to America. I terminated deal, which was not even ratified by Congress, and imposed strong sanctions. They are a much weakened nation today than at the beginning of my Presidency, when they were causing major problems throughout the Middle East. Now they are Bust!”

Speaker of the House Nancy Pelosi released the following statement on the President’s decision to approve and then cancel a military strike on Iran:

“We are in an extremely dangerous and sensitive situation with Iran.  We must calibrate a response that de-escalates and advances American interests, and we must be clear as to what those interests are.“During our meeting with the President at the White House, Congressional Leaders stressed the necessity that we work with our allies and not strengthen the hand of Iran’s hardliners.

“Democratic Leaders emphasized that hostilities must not be initiated without the approval of Congress.

“We have no illusions about the dangerous conduct of the Iranian regime.  This is a dangerous, high-tension situation that requires a strong, smart and strategic approach.”