This news story was published on May 6, 2013.
Advertise on NIT • Subscribe to NIT 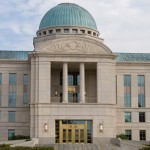 DES MOINES – The Iowa Supreme Court recently affirmed the efforts of the City of Okoboji, Iowa to enforce zoning restrictions on a property located on the shore of West Lake Okoboji in reference to a floating bar called the Fish House Lounge that was operating at the location.

City officials argued that the Fish House Lounge violated residential zoning rules and increased traffic and noise at the location.

Fish House owner Leo Parks argued that in addition to state sovereignty and statutory preemption arguments, whether the City of Okoboji as a matter of local law has the power to assert its zoning authority over the Fish House Lounge.

The court’s ruling means that owner Leo Parks will not be able to use his marina on West Lake Okoboji to operate the Fish House Lounge.