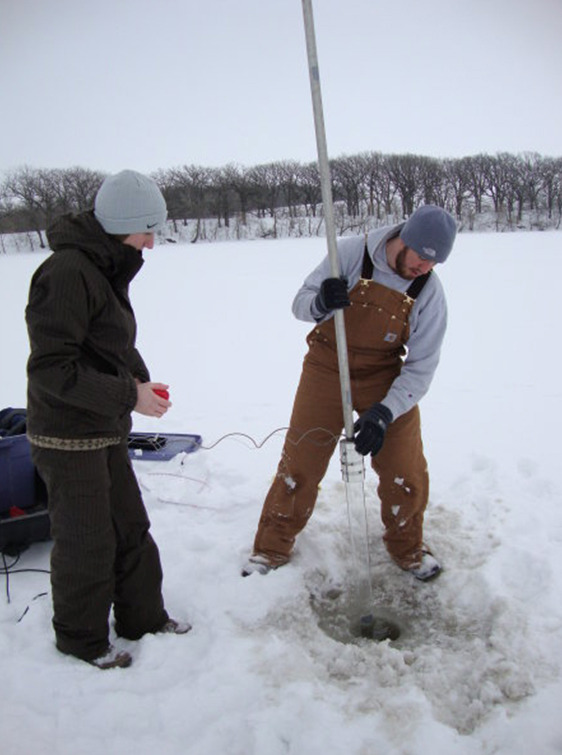 AMES, Iowa – A new study conducted by researchers at Iowa State University shows that the growth of sediment deposits at the bottom of Iowa’s natural lakes is accelerating despite widespread soil conservation efforts.

The findings raised concerns among the study’s authors that the increased buildup of soil on Iowa’s lake bottoms could damage wildlife habitat and contribute to other environmental problems.

The paper, published Wednesday in PLOS ONE, used core samples from 32 natural lakes in the state of Iowa to track the growth of sediment deposits over the last 150 years by studying lead isotopes contained in the samples. That allowed the researchers to create a chronology of the samples that helped them determine the rate at which sediment was settling on the lake bottoms.

The study found that the amount of soil runoff going downstream and settling in lakes appears to be increasing.

Among the lakes included in the study, researchers found that about two pounds of sediment are now deposited on each square yard of lake bottom every year. That sediment accumulation rate is more than double the average rate found in other regional studies, Downing said.

“This thickness is like dropping 50 dump truck loads of soil into each lake every year for the last century-and-a-half,” said Adam Heathcote, an ISU graduate student who led the study. “It would add the same thickness as dropping a 10-pound bag of flour on the kitchen floor every month for a hundred years, and never cleaning it up.”

Most of the lake sediment originates as soil that washes in from land upstream, Downing said, while some comes from algae that grow from excess nutrients. Between 60 and 80 percent of sediment that washes downstream originates on only 5 to 10 percent of the land in a given watershed, and this highly erodible land usually features high slopes and is often cultivated to grow crops, he said.

“Given the tremendous emphasis on soil conservation we’ve seen among farmers in recent years, we expected to see some deceleration of sediment accumulation,” Downing said. “But what we found was the opposite.”

In the years following the Dust Bowl, the United States implemented an array of measures aimed at preventing soil on farmland from washing into waterways, spending about $250 billion over the decades to that end, he said. Despite those efforts, the study shows the amount of sediment washing downstream is growing rather than shrinking.

“Iowa is a bellwether and what happens here might be an indication of what is going on in other places where agricultural demands are increasing,” Downing said. “The findings suggest we need new approaches to address the problem. The measures we have been taking don’t appear to be going far enough in the right direction to reverse the trend.”

Downing said excess sediments can create a range of environmental problems such as poor fish and wildlife habitat, loss of oxygen needed by aquatic animals and plants, poor swimming conditions, and murky waters. Too much sediment also can cause lakes to fill in abnormally fast and cause large dredging costs.

Chris Filstrup, a limnologist and an ISU postdoctoral research associate who worked on the research team, said increased sediment loads in lakes also can contribute to the growth of algae that can have a negative impact on waterways.

“Another reason to be concerned about this is that both increased nutrient loading and murky waters caused by excess soil erosion favor growth of harmful algal blooms, especially the brilliant blue-green surface scums that are common in this region,” Filstrup said. “Blue-green algae, or Cyanobacteria, raise health concerns related to the liver, nerve, and skin poisons they release. They can cause fish kills related to decreased oxygen, and reduce neighboring property values due to unsightly surface scums.”

The study was funded by grants from the Iowa Department of Natural Resources Lake Restoration Program and the National Science Foundation Division of Environmental Biology.

The full study is available by clicking here.