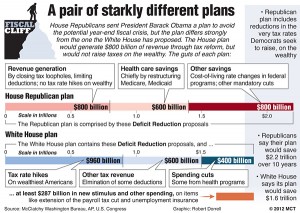 WASHINGTON — A Republican proposal Monday to shave $2.2 trillion off projected budget deficits sets up a fiscal-cliff showdown with the White House because the plan includes reductions in the very tax rates that Democrats seek to raise.

The Obama administration’s opening offer sought to raise $1.6 trillion in taxes over 10 years, much of it from higher income-tax rates on the wealthy. Republican leaders in the House of Representatives countered Monday with their own offer, saying their plan would raise $800 billion in new tax revenues but basing that on cuts in tax rates coupled with limits on deductions that would make more income taxable.

The plan, contained in a three-page letter signed by seven House Republican leaders, is a counteroffer to last week’s Obama administration proposal. Aimed at jump-starting stalled talks, the proposal instead sharpens the battle lines with just four weeks to go until temporary tax cuts expire for all Americans and automatic spending reductions start going into effect.

—$1.2 trillion cut from projected spending over the coming decade.

—$200 billion from changes to a wide variety of federal programs that might include new ways of calculating cost-of-living increases.

No money is included for economic stimulus; the Obama plan sought $50 billion in one year. Nor is any mention made of increasing the nation’s debt limit.

That’s significant, because the White House is seeking an easier way to approve increases that allow new debt to be issued to cover existing obligations. The federal government is expected to start bumping up against the $16.3 trillion debt ceiling late this month, and extraordinary measures to move money around could buy another two months, three at most, before the United States defaults on some of the debt it owes, absent establishment of a new ceiling.

The White House panned the proposal as unbalanced.

“In fact, it actually promises to lower rates for the wealthy and sticks the middle class with the bill,” White House spokesman Dan Pfeiffer said in a statement. “While the president is willing to compromise to get a significant, balanced deal and believes that compromise is readily available to Congress, he is not willing to compromise on the principles of fairness and balance that include asking the wealthiest to pay higher rates.”

The $800 billion in tax revenue, which Republicans contend is a significant concession, wouldn’t be achieved through higher tax rates, “which we continue to oppose and will not agree to in order to protect small businesses and our economy,” the House Republicans’ letter said.

“Instead, new revenue would be generated through pro-growth tax reform that closes special interest loopholes and deductions while lowering rates,” they argued.

The White House’s proposal seeks to raise $600 billion over a decade by eliminating tax deductions, and $960 billion over 10 years by raising marginal tax rates for the top 2 percent of income earners.

The $1.2 trillion in proposed spending cuts includes $300 billion in savings on discretionary programs, or spending that Congress and the White House can control more easily. Such programs usually include education, housing and transportation.

The other $900 billion would come from so-called mandatory programs and health care, presumably Medicare, Medicaid and other programs in which spending is often subject to automatic formulas.

The GOP plan wasn’t specific, although the letter to the president noted that a House-passed budget resolution assumes “enactment of structural Medicare reform.” The White House hasn’t been too specific, either, and that’s troubling to budget watchdog groups.

Rivlin and former New Mexico Republican Sen. Pete Domenici, who headed the Senate Budget Committee during past tax deals, offered an updated version of a plan they co-authored at the Bipartisan Policy Center. Their plan includes graphics showing that health care spending is the driver of the nation’s fiscal problems, and both rapped the administration for not spelling out more clearly what it envisions for mandatory spending programs.

“You can’t get to a solution unless you do entitlement reform,” said Domenici, now an elder statesmen.

The Republicans haven’t publicly worked out the process for approving any of their proposals. Some presumably would be passed before Dec. 31, when the Bush-era tax cuts are due to expire and automatic spending cuts totaling $109 billion are to take effect in January. Other pieces would be passed later, though the two sides would be expected to create a framework for consideration.

“What we’re putting forth is a credible plan that deserves consideration from the White House,” Boehner said.

In the Senate, where Republicans haven’t offered a plan, Minority Leader Mitch McConnell of Kentucky was sympathetic to the House offer.

“While the president hasn’t moved an inch away from his efforts to please his radical left-wing base, the speaker has consistently shown a good-faith effort to find common ground and a realistic approach to solving the very real economic problems facing our country,” McConnell said.