Governors meet with Obama, members of Congress on fiscal cliff 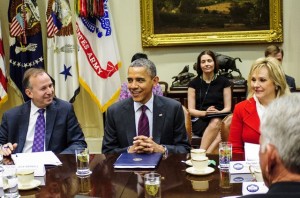 President Barack Obama meets with a bipartisan delegation of governors in Washington, D.C., on Tuesday, December 4, 2012, to discuss the actions needed to keep our economy growing and find a balanced approach to reduce our deficit.

WASHINGTON — A bipartisan group of governors came to Washington on Tuesday to express concern to the White House and members of Congress about the potential consequences to state budgets in the fiscal cliff negotiations.

The governors are worried both about the possibility a deal may not be reached by year’s end and also that a final accord might rely on cuts to programs states are counting on to keep their own budgets balanced.

While the focus in Washington is on the impasse between President Barack Obama and congressional Republicans on the fate of George W. Bush-era tax rates for the well-off, governors are warily tracking discussions about spending cuts as many are set to present their own budget proposals for the new year.

“We don’t need cuts on the federal level that merely require tax increases on the state level,” Arkansas Gov. Mike Beebe, a Democrat, told reporters outside the White House.

A new report from Harvard’s Institute of Politics, the University of Pennsylvania’s Fels Institute of Government and the American Education Foundation noted that grants to states make up 40 percent of discretionary spending in the federal budget, and that state block grants “will be a prime target” for national cuts.

The state leaders, three Republicans and three Democrats, said they came not to support any particular party’s plans but to offer their perspective on the decisions lawmakers face, and to urge a quick resolution that would end uncertainty that has the potential to hurt states and the national economy.

“It has a dramatic impact on our budgets at a very difficult time for us,” said Utah Gov. Gary Herbert, a Republican. “It’s almost like we have to prepare one budget if they solve it and one budget if they don’t solve it. And so states really understand the serious of this issue and the impact it’s going to have on our own budgets and our own economy.”

Herbert said that the states were willing to “do more with less,” acknowledging that some funding cuts are inevitable in any deal. But in a familiar request on the part of state executives, the governors wanted greater flexibility in spending federal dollars that still come, a request that Herbert said Obama was receptive to in their meeting.

Obama was joined by Treasury Secretary Timothy Geithner and Vice President Joe Biden in the meeting with the executive committee of the National Governors Association. Biden was tapped to be a liaison with the governors during the fiscal cliff talks, a familiar role for the man who oversaw the implementation of the stimulus bill passed in 2009.

One day after Republicans offered a counterproposal that the White House swiftly dismissed, Obama offered no indication of how talks were going.

“I know that the president certainly wants a deal,” said Delaware Gov. Jack Markell, a Democrat and the chair of the NGA. “He didn’t try to handicap it for us, but he made it very clear that he’s going to work as hard as he possibly can (to get one).”

The governors were set to head to Capitol Hill later Tuesday to meet with Speaker John Boehner and other legislative leaders.