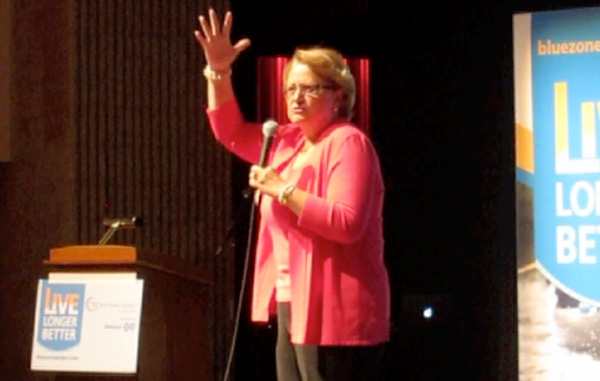 MASON CITY – Mason City officially kicked off its Blue Zone project Friday night at NIACC.  The goal is to eventually help Iowa become the healthiest state in America by the year 2016.

Local zumba expert Laura Jumper led the crowd and a troop of her own dancers in a warm up with loud, thumping music to set the tone for the evening (see video).

By far the most entertaining segment of the event was a 5 minute performance from long-time Mason City High School language arts teacher Deadra Stanton.  Stanton gave the crowd an abdominal workout as she brought the laughs, telling about how she was “the ugliest kid in school” but never gave up.  She said perseverance is the key to anything in life, and that this Blue Zone project deserves that same kind of tenacity from the citizens of Mason City.

Blue Zone mastermind Dan Buettner gave an extremely informative lecture to the crowd of about 500 people (the NIACC Auditorium holds 1158; it was roughly half full).  Buettner spoke about eating habits, and “having a reason to get up in the morning.”  He showed a 2-minute video where folks in Albert Lea focused on this aspect, and about a cool new social activity that is now available in Mason City called “Moai Walking Groups.”

The walking groups are a way for people to make new friends, an important part of Blue Zones around the world.  Friends and “purpose” are hallmarks of a long life, Buettner explained.  The public was able to sign up to participate in the walking groups and other tools at displays set up in the lobby.

Buettner described a lifestyle in Blue Zones where people “move naturally” and “make healthy food taste good” and where folks have strong social networks.  Diet is only one aspect of the lifestyle.

Mason City is well on its way to becoming a certified Blue Zones community.  This past week, North Iowa Area Community College (NIACC) became the first business in North Iowa to be designated as a Blue Zones Worksite.  City, the school district, and the business community are all on board as well, making changes and strides to reach the goal.