Windows to Heaven at the MacNider Museum 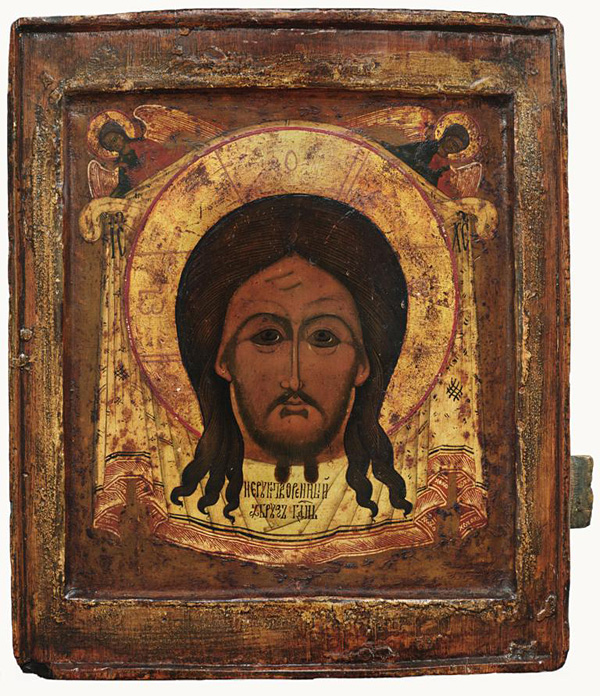 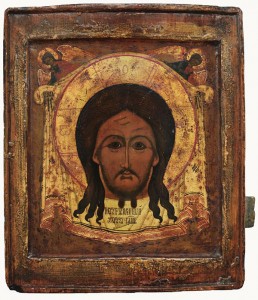 Opened in 2006 by Gordon B. Lankton, a Massachusetts industrialist, The Museum of Russian Icons was founded as a non-profit educational institute, based out of a unique 19th Century building in Clinton. Through his many travels to Russia, partnered with a passion for Russian history, Lankton’s collection spans an astounding six centuries.

Windows to Heaven brings together twenty-four historically significant works from the collection, dating from 1590 AD to present day. This spectacular exhibition helps demonstrate how religious structures and organizations are created by civilizations to reflect their own spiritual, social, and political needs.

A distinct and emblematic part of Russian culture, icons trace back more than ten centuries to the conversion of pagan Rus’ to Orthodox Christianity, when Prince Vladimir of Kiev decided it should become the national religion. The Greek branch of Christianity educated and shaped the spiritual foundation of Russian society, resulting in a shift of creative energies towards the adoration of religious iconography. Said to be the directly inspired by God, the Greek Orthodox tradition of icon painting was imported to Russia during the religious transition.

Over time, the Greek and Russian Orthodox churches parted and became separate entities; with the depiction of spiritual events also showing its distinctiveness. A turning point in the progression towards a uniquely Russian style of icon painting came with the work of Andrei Rublev, who painted the famous Trinity icon in 1411.This piece is considered the beginning of a unique Russian iconographic style, and is also a rare instance in which the artist’s name is actually known, despite the common traditions. Unlike Western European traditions of placing emphasis on the style of the specific artist, Russian icon painters (often considered “writers”) are seen more as craftspeople working in the service of God. Therefore, the majority of works are referred to by the region or type of icon rather than the artist. 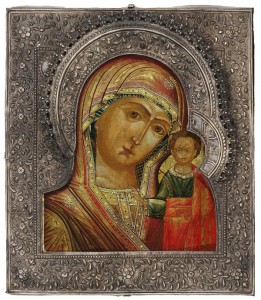 Painted mainly by monks, the worshipper focuses on not what is seen on the print is but what can be seen through it. The icon is a “window to Heaven,” or a Gospel in paint, allowing the viewer to create a mystical world beyond that which our senses perceive- a direct connection between their own beliefs and the Heavens. The art of icon making is considered sacred, and all parts of the creation process encompass that belief with symbolic meaning. From the wood of the panel that refers to Jesus’ crucifixion, to the natural dyes and pigments as bounty from God’s creation, each step of the process is accompanied by prayer and contemplation. The paint is even applied to the wood from dark to light, as in the creation of the world is described in Genesis: “light coming from darkness.”

However, the history of icon writing and veneration has been periodically disrupted by iconoclasm, where the revered icons were destroyed by means of burning and dismantling. Coming from the Greek words eikono and klan, the word iconoclast literally means “image breaker.” The Byzantine Empire saw two main waves of iconoclasm from 726 –787 and 815–843 AD. Due to this, very few early Byzantine icons exist today. With much thanks and appreciation to The Museum of Russian Icons, a spectacular collection of over 450 icons are displayed, making the museum in Clinton, Massachusetts one of the largest collections outside of Russia. Twenty-four of those unique pieces make up the Windows to Heaven exhibit, introducing visitors to a rich Russian culture and history.

The showing here in Mason City is part of a three year national tour, containing 24 icons and exhibition text. The exhibition was organized by The Museum of Russian Icons, located in Clinton, Massachusetts, with the tour developed and managed by Smith Kramer Fine Art Services, an exhibition tour development company in Kansas City, Missouri. Windows to Heaven is sponsored locally by the Alliant Energy Foundation and the John K. and Luise V. Hanson Foundation.

The Charles H. MacNider Art Museum is free and open to the public. Museum hours are Tuesday – Saturday, 9 a.m. – 5 p.m.; Thursday, 9 a.m. – 9 p.m.; Sunday – Monday, closed. Please contact the Museum for more information about Windows to Heaven, or any of our events and programs, by calling 641-421-3666 or visiting our website @ www.macniderart.org.