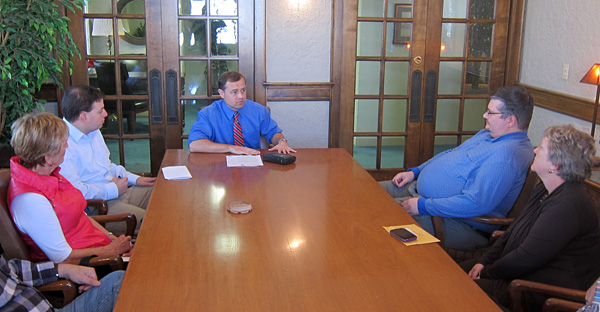 MASON CITY – A report by an east coast think tank claiming to outline the “real cost” of the Romney-Ryan policies to Iowans was released on Monday afternoon at the law offices of Tim Lapointe in Mason City.

“Iowans are tired of the ads and hungry for facts, and this report lays out the evidence behind the fact that Romney’s plan would mean higher taxes, tuition, and health care costs for middle class families,” said Tom Perriello, President of the Center for American Progress Action Fund and point man for the report.

In attendance to listen to Perriello’s introduction of the report were Rep. Sharon Steckman and Sen. Amanda Ragan.

The report, “The True Cost of Romney-Ryan To Iowans” can be read online.

“This report highlights the fact that the Romney-Ryan plan will under-fund transportation and research, reward outsourcing, and ask struggling families and seniors to pick up the tab,” Perriello said.  “Iowans deserve a just-the-facts tour that avoids the personality debates to focus on the practical impacts at the kitchen table.”

The Center for American Progress Action Fund launched Romney University this summer to inject facts and policy into the national debate. Over the past month, CAP Action has been touring the country – traveling to 9 states, reaching over 25 cities and meeting with community leaders – releasing state specific reports taking a close look at the costs each American will pay for Gov. Mitt Romney and Rep. Paul Ryan’s (R-WI) policies that ask the middle class to pay more so the wealthiest Americans and huge corporations can pay less.

Key findings of the report include:

CAP Action is also traveling to Des Moines, Waterloo, Cedar Rapids and Iowa City on the “True Cost of Romney-Ryan to Iowans” Tour.